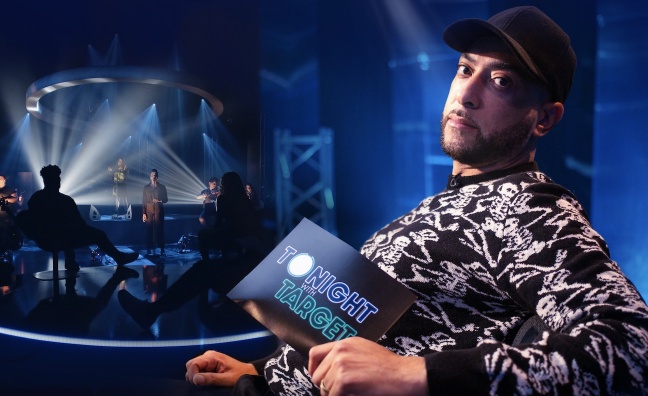 Tonight With Target launches today (September 3) at 6pm and is available via the BBC iPlayer. A mix of live performances and round table chat, the programme not only aims to showcase the best Black British music but the culture behind it too.

Guests on the opening show include Ghetts and current Music Week cover star Little Simz, with Ms Banks, KSI, Jorja Smith and Kojey Radical among those set to follow across six episodes.

Here, DJ Target, BBC Radio 1Xtra new music expert turned TV host, speaks to Music Week about swapping the mic for the screen, stepping down as co-music lead at BBC 1Xtra and the chance to create opportunities for a new generation of artists and TV creatives.

People have been saying for years that music on TV is in decline, how did you convince the commissioners about Tonight With Target?
“Stepping into this, I was feeling like there's such a thirst for these artists. I know online there are a few online platforms, but I just felt like there was no one who was really representing Black culture on television in a way it deserves. If you look across the board you've got so much success: headline acts at festivals, BRIT Award winners, No.1 albums and all these different accolades. All these things are happening, but I felt there was nowhere you could turn on the TV – in a similar way that you would have done with a Jools Holland or going back, even Top Of The Pops – and see 2021's offering. So the show is not only live performances, we’re tapping into the culture a bit more. I’m just trying to really represent what's going on out there. So that's where it came from. I didn't really have the thoughts from a TV perspective about what shows they are making at the moment. We just went in and went, 'Look we've got this idea, we know there’s a thirst for it.’ Luckily the channel was on the same page.”

So is that thirst for Black music culture the reason why you have interviews as well as performances, to create narrative?
“Yeah. Having that round table feel where there are four of us chatting is something that's relaxed and chilled and the artists feel comfortable. It's not just artists though. We’ve got people from all across the industry: DJs, comedians, online personalities and more. It's just nice to have different characters sitting around having a nice chat about music and the wider culture. That was the thought process behind the show, just to bring a bit more of a personal touch to it.”

How are you booking guests?
“Going through my phonebook! No, we wanted to represent some of the bigger names, but at the same time, we definitely wanted to have a platform for artists who are on the rise. I wanted people from all aspects of the scene, from the newer artists to the bigger names, rap stars to up-and-coming singer-songwriters. I wanted the show to be diverse.”

I want people from all aspects of the scene, from the newer artists to the bigger names, rap stars to up-and-coming singer-songwriters

To what extent is this show a celebration of Black British music but also, for some audiences, an introduction to it?
“Both, to be fair, are very high on our priority list. We definitely want it to feel like it's a celebration and a reflection of what's happening within Black music culture. But at the same time, hopefully, there are going to be lots of people watching who don't know about these artists. People who are delving in a little deeper into the culture for the first time. I'm sure, whoever you are these days, you will have heard a Stormzy or Dave record on the radio. Everybody's had a taste of the culture, but no matter how big or small, we're trying to bring people in.”

Is that balance something you can do more on TV than, say, on a specialist station like 1Xtra?
“Yes. As much as we've got a lot of online platforms, social media and the eyes and ears of the consumer are everywhere at the moment, I think TV has still got its strengths. When there's something people want to watch on TV they'll sit in front of the TV and watch it as a whole show. TV is always going to have that added reach.”

The show itself is clearly a demonstration of this, but Black music is getting bigger and bigger. Why do you think that is?
“It's been a slow build over the last 15 years. Very slow at first! Then you started to see the early success stories, like Dizzee Rascal. There's been a bunch of artists who have just started to crack the door open for Black music. In 2021, the new consumers now are more open than ever before. What people are into is a melting pot and with the quality of British music at this time things are lined up. It's overdue, but we really are seeing the fruits of the labour of all the artists who have been putting in so much work in over the years.”

Are you seeing a similar change within the British music industry too?
“Across the board. I think people are now being more conscious of trying to really make sure of representation. We've seen a lack of it within the music industry. I'm still new to the TV industry, but from what I hear it's not been any better, maybe even worse. But now is the time that people are paying attention to what they're doing, whether that’s the amount of representation within a company or the content on screen. The more that we're seeing the better. There's still a long way to go, and it is something that has needed to be done for a while, but over the last couple of years things have started to change.”

It must be good to have the show at this point. You can celebrate the culture but you can also change it...
"Yeah, definitely! Especially on TV. There's been a lack of representation, and sometimes when there have been shows that have made an attempt to represent different parts of the culture they missed the mark a lot of the time. So we're trying to do something that is authentic and at the same time we can bring a new light to what TV culture can be. By making the show we've been lucky enough to be able to give opportunities for people to come through. To be part of TV production and represent across the board when it comes to gender and race. I am really excited about that and I want to do more. We've started a TV production company, myself and my managers, and we're looking to do a doc and other stuff in the TV world.”

Is that why you stepped down from the music lead role at 1Xtra recently?
“It wasn't just, OK, let's swap that role for doing TV.’ I'd just become increasingly busy. I loved my time in the role, we did some great things, but it just came to the point where I was going to have to really start juggling. A lot is happening on a lot of different fronts. From the TV stuff, a couple of extra shows and a record label I wanted to do a lot more with. Plus, I've now got a baby who I didn't have a couple of years ago, so I felt like the time was right for me to step down. I didn't want to step down at a time when things were shaky and, obviously, during the pandemic it was really tough. I wanted to leave on a high to make way for somebody else.”

Talking of the next generation, what is your message to artists, managers and labels about the opportunities Tonight… offers?
“It's really important for me to try to introduce fresh talent. For a lot of artists, it takes them a long time to get into the position where they'd be able to be on a TV show. So the fact that we've now got a show where we can celebrate some of those new artists alongside some of the bigger names, it will hopefully inspire those who are coming up because it's something that's attainable. When I was young, you used to watch things like Top Of The Pops and think, ‘The show is amazing, but how many artists from our world are ever going to get on there?' Whereas this show will hopefully inspire that next generation because they now have a platform. Playing the show is something they can put on their bucket list, hopefully!”