Grammys 2019: Warner Music, Spotify and BMG get the Grammys party started, but Ariana Grande shuts off the main event 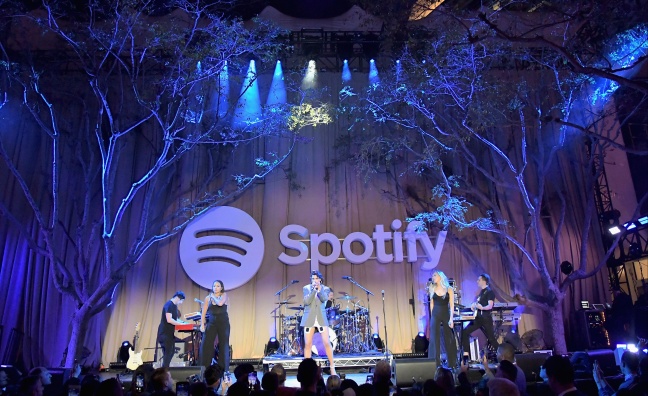 Greetings from Los Angeles, where the biggest problem the music business faces ahead of Sunday’s Grammy Awards ceremony seems to be which party to attend.

Last night’s events saw a clash between two of the hottest pre-parties, Warner Music’s bash at the Nomad Hotel and Spotify’s Best New Artist shebang at the Hammer Museum. With the two a frustratingly long Uber ride from each other, execs and artists alike had to carefully weigh up their options.

Dua Lipa, however, UK pop sensation and Grammy nominee, had it covered. She smashed the first-on slot at Spotify’s bash (pictured) then hot-footed it over to also perform at Warner’s star-studded do, even finding time for a costume change en route.

Lipa – surely front-runner for the Best New Artist Grammy – was the highlight of Spotify’s lavish bash, which also featured sets from country star Margo Price, R&B duo Chloe X Halle, Bebe Rexha (who made her displeasure at the schmoozing crowd known), HER and another Brit, Jorja Smith. In the crowd, meanwhile, were the likes of Hailee Steinfeld, Diplo, Nicole Scherzinger, Quincy Jones, Big Machine’s Scott Borchetta and Scooter Braun.

The Warner Party, meanwhile, also attracted the sort of crowd that makes some execs rate the Grammy parties higher than the event itself. As well as artists such as Music Week Breakthrough Artist of 2018 Anne-Marie (in town to write for her second album, rather than for the Grammys), Mike Shinoda, Rita Ora and Brandi Carlile, Warner’s star-studded exec line-up was in full effect, including CEO Stephen Cooper; CEO, recorded music, Max Lousada; new Warner Bros bosses Tom Corson and Aaron Bay-Schuck, Atlantic’s Craig Kallman and Julie Greenwald and UK execs such as Atlantic’s Ben Cook and Asylum’s Ed Howard. Top managers such as Jazz Sherman (Anne-Marie) and Ben Mawson (Dua Lipa) were also in attendance.

BMG’s Wednesday night party at the No Name was similarly over-subscribed, with execs queuing in the surprisingly chilly LA evening to get to see rapper Gashi do terrible things to Oasis’ Wonderwall and even persuade BMG LA boss Thomas Scherer up on stage with him. Margo Price – also doing double duty on the Grammys party circuit – and Alice In Chains’ Jerry Cantrell also performed, while the likes of Hartwig Masuch, Alistair Norbury and Perry Farrell looked on.

But if the parties are in more demand than ever, Grammys organisers seem to have their work cut out getting the biggest names to perform at the actual ceremony nowadays.

The Recording Academy became embroiled in an unseemly row with Ariana Grande yesterday. After Grammys producer Ken Ehrlich gave an interview that said Grande’s absence from the show was because the singer “felt it was too late for her to pull something together”, Grande responded angrily on Twitter.

“I’ve kept my mouth shut but now you’re lying about me,” she tweeted. “I can pull together a performance over night and you know that, Ken. It was when my creativity & self expression was stifled by you, that I decided not to attend. I hope the show is exactly what you want it to be and more.

“I offered three different songs,” she added. “It’s about collaboration. It’s about feeling supported. It’s about art and honesty. Not politics. Not doing favours or playing games. It’s just a game y’all… And I’m sorry but that’s not what music is to me.”

The Grammys can ill afford such drama, after last year’s poorly-received show when the ceremony was criticised for its lack of diversity. Drake, Kendrick Lamar and Childish Gambino also reportedly turned down slots on this year’s show, although big name performers do include the likes of Miley Cyrus, Lady Gaga, Cardi B, Red Hot Chili Peppers and, of course, Dua Lipa who, at the very least, deserves the Grammy for hard work.

Watch this space for what goes down on the night. At least the after-parties should be well-attended…