Hung parliament: What does this mean for the industry? 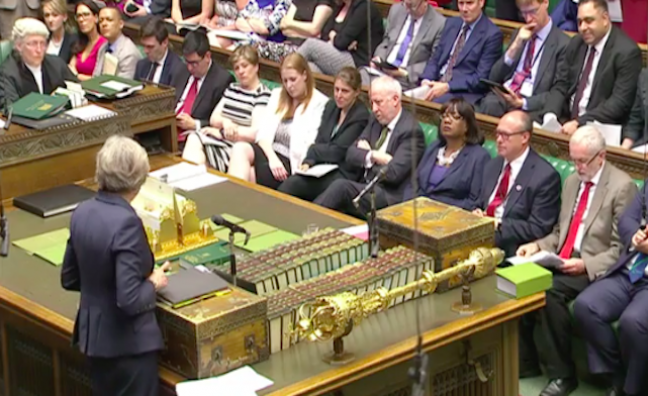 Regardless of where you land on the political spectrum, very few could have predicted the outcome of yesterday’s General Election, as the widely expected Conservative landslide failed to materialise. In fact, despite being the largest party, it looks like the Tories also failed to deliver the majority required to take Government, resulting in a hung parliament.

The picture will become clearer over the coming days as to the complexion of the next Government, but in the meantime, Music Week takes a look at what each of the parties pledged for the music industry in their manifestos ahead of the election and what they could bring to the business.

We know that each of the main parties have highlighted the freedom of artists across Europe in the wake of Brexit, indicating that whatever Government or coalition is formed, this subject will remain a top priority.

Culture Minster Matt Hancock told Music Week: “We’re going to have to have a new immigration system and we’ve got to make sure the brightest and the best can still come here and that it works effectively.”

Labour deputy leader Tom Watson also addressed the issue with regard to music tourism, stating that “as Britain leaves the EU it doesn’t become more difficult for tourists to come and enjoy our music”.

The Lib Dems’ digital economy spokesperson, Lord Clement-Jones, offered similar sentiments: “We would ensure that the movement of national and international talent across borders is protected and remove any barriers to entering the UK to attend a cultural event.”

All three also appear to be on the same page when it comes to the subject of existing EU copyright legislation, which many across the industry will want to see established in UK law after we have left the EU.  What remains to be seen, however, is just how committed they are to driving these issues home when, whichever combination of parties it may comprise, a new Government is established.

New UK Music chief executive Michael Dugher also outlined these issues as being among the most pressing issues for the next Government, as far as the music industry is concerned. He told Music Week: "Brexit provides us with some new opportunities but that freedom is crucial during Brexit negotiations, in terms of making sure the creative industries aren’t used as a bargaining chip in any trade talks. We want to make sure UK music content is not subject to restrictive quotas or costly tariffs when we come out of the EU.

"We also need to maintain and strengthen the copyright framework; that’s going to be of huge importance to the industry during Brexit and beyond. The EU’s competency over copyright means UK domestic legislation is based on directives from the EU. And the EU provides high levels of protection for copyright. We want this to continue. Closing the value gap is a huge priority for us as we come out of the EU."

Depending on the outcome of the next few days, Brexit negotiations on the whole look set to be thrown into disarray. If, as some are suggesting, Prime Minister Theresa May steps down from her post as leader of the Conservative party, it’s highly likely we’ll see yet another General Election held in the coming months once a new leader is appointed. Clearly this will have implications on how those negotiations unfold.

On a night when some high profile figures lost their seats, Culture Secretary Karen Bradley and Culture Minister Matt Hancock were both re-elected, meaning both could - at least in theory - carry on in their roles, which would offer the biz some stability in terms of already-established relationships. But, even if the Conservatives do form the government, a reshuffle looks likely (Bradley had been tipped for a new role ahead of the poll), meaning the biz may have to lobby less familiar figures. And making the case for music biz issues at a time of political confusion is likely to be tougher than ever.

What is vital now for the music industry is that it comes together to present a clear and concise case for what it wants from Brexit negotiations, so that when a new Government is installed, it can hit the ground running in ensuring the best possible deal for the industry. Watch this space...