'I am in my happy place': Jo Whiley talks radio, breaking artists and Britpop at Music Week Awards 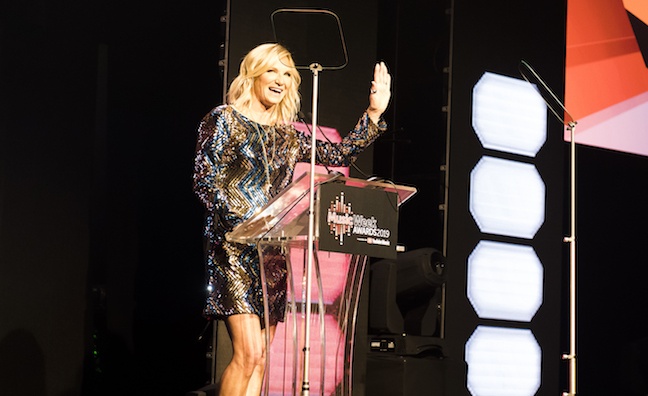 Jo Whiley made her Music Week Awards debut as the star host of this year’s ceremony at Battersea Evolution.

The Radio 2 presenter took over from Lauren Laverne – a winner on the night - for the 2019 edition of the biggest night in the industry calendar.

Here, you can read Whiley’s awards speech, including her take on the industry in 2019, the Britpop years and her defiant reaction to the critics who took aim at the network’s Drivetime experiment…

Good evening everybody. Lovely to be here with you, and I hope you enjoyed your dinner — just be thankful that we decided not to model the Music Week Awards menu on the Fyre Festival, and spared you a particularly sad-looking cheese sandwich.

It’s a year of birthdays and anniversaries - Decca Records is 90 years old this year, Island Records is turning 60 and so is Music Week itself!

On to more recent history - many of you will have fought the Britpop wars and survived. Just. Hard to believe then, that Blur’s Parklife and Definitely Maybe by Oasis were both released 25 years ago. As for the Stone Roses - their debut Album this year turned 30! How can that be? How old do you feel now?

Music Week was launched as Record Retailer in August 1959, when the British music industry was moving at such a breakneck speed that the magazine had to come out once a month. The first issue had a report on how sales of 78rpm records had taken a serious tumble over the previous two years, but the seven-inch 45rpm single was going great guns.

So you see, the format wars are nothing new, and now we have vinyl living side by side with streaming. 142 million albums or their equivalent were bought or streamed last year and that's an increase of 5% year on year, so we're still doing something right.

On the one hand, you've got Spotify floating on the stock exchange, now worth $30 billion. On the other hand, the album charts of the past year have been dominated by the return of old-school showbiz in the form of all those massive movie musicals and biopics. How many people here have had their school runs of the last year soundtracked by This is Me, A Million Dreams and Rewrite the Stars from The Greatest Showman - or have rediscovered a new love of Queen thanks to the juggernaut that is Bohemian Rhapsody? Singing at the top of their voices to something deeply uncool but actually hugely enjoyable. Also, let’s not forget the phenomenal success of A Star is Born and still to come we have Elton's Rocketman, Bruce Springsteen film Blinded By The Light and next year Celine Dion. Music is the gift that just keeps on giving.

In terms of new music, I think we’re in a pretty good place. There are some fantastic artists coming through right now, lots of great new people I've been playing on my show like Jade Bird, Sam Fender, Georgia, Dave, Billie Eilish, Angie Mahon, J.S. Ondara, Gang of Youths, Yola, and many more.

Right, let’s move on to radio. Well, that was an interesting year! Chris Evans packed up his bags and took his hugely successful radio show off to Virgin without telling anyone he was taking his team, his co-presenters, his carfest north and south and even his jingles with him. Lots of big names moved around, Zoe Ball was crowned the Queen of Breakfast on Radio 2, Lauren Laverne was appointed the rightful heir of the 6 Music breakfast show and Greg James became the fresh Prince of Breakfast at Radio 1. Just about all the networks announced new schedules, various stations came on air, and for a few months, Radio 2 conducted a daring experiment by broadcasting live water torture every weekday between 5 and 8pm. I am, of course joking. But I do want to point something out. Forget the tabloid headlines, the trolls and the endless letters of complaints to the Radio Times. There’s a lesson to be learnt here for anyone working in the media, whether you’re a record company or a radio station. Underneath all the noise and chatter on social media and the tabloid sensationalism, never let fake news get in the way of the actual facts. In the same quarter that the brilliant Greg James breakfast show put on 250,00 listeners, the final RAJARs for Radio 2’s Drivetime programme showed that we’d put on 280,000 listeners - something that people simply forgot to report. Funny that! Anyway, mission accomplished. Simon decided that he wanted us to consciously uncouple and off he went to Scala. Taking his Confessions with him.

As you’ll all be aware, I am now back in my happy place. BBC Radio 2, Monday to Thursday 7 till 9 - just in case you didn’t. The Evening Session, kind of. New music, live sessions, interviews with music legends. As fuck ups go - that’s one of my better ones.

George Ezra went from strength to strength and proved that not all second albums have to be ‘difficult’, when Staying At Tamara's became the best-selling artist album of 2018. Already this year we've seen Tom Walker grab the biggest debut release of 2019 so far, and there was big success and critical acclaim for the English rapper Dave. And just to prove that it's a marathon and not a sprint, we've also had No. 1 albums for a few people who've paid some dues, shall we say, whether it's Michael Ball or Jack Savoretti or The Specials.

Ariana Grande came back and conquered the world again, so much so that the only person she seemed to be in competition with was herself. She became the first female artist in history to replace herself at the top of the UK singles chart when Break Up With Your Girlfriend, I’m Bored took over from 7 Rings... and then 7 Rings replaced Break Up With Your Girlfriend! So it was quite appropriate that her No. 1 album was called Thank U, Next.

You know how old you felt when I told you about Blur, Oasis and Stone Roses? Anyone remember buying Is This It by The Strokes? Remember when Jay-Z released The Blueprint, Gorillaz put out their first album and remember that lost night when you danced to Kylie Minogue’s Can’t Get You Out Of My head? Well - just to make you feel really really, REALLY old - this was the year that Billie Eilish was born. 2001! How are you feeling now? Billie has become the youngest female chart-topper in UK history with the album When We All Fall Asleep, Where Do We Go? She plays Glastonbury this year and has been moved from the John Peel tent to the Other stage because of anticipated demand.

And one more 2019 breakthrough artist I have to mention, of course, is Lewis Capaldi, who's won our hearts not only with his single Someone You Loved but his Instagram posts from hotel rooms which have given us a whole new insight into what it's like for an artist on the road – whether it's waving his wee willy winky at unsuspecting workmen in New York, or not having a toilet brush in LA.

The days of blowing your success on sex and drugs are officially over - this is a man who went down Hollywood Boulevard to buy a toilet plunger. In the words of Tom Walker - What A Time To Be Alive!