"I very much doubt we'll do anything else": Jimmy Page tells Planet Rock about Led Zeppelin touring future and new live album 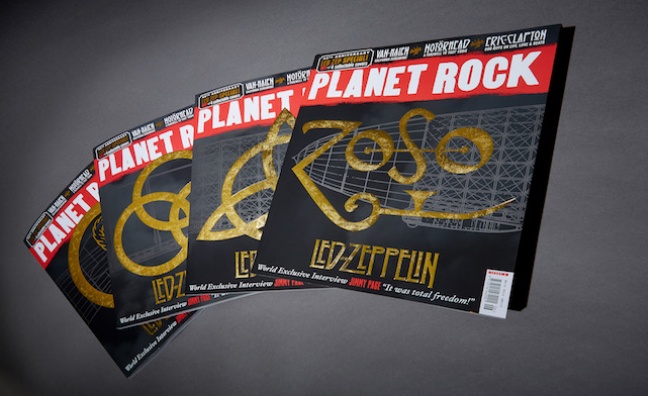 Led Zeppelin’s Jimmy Page has opened up about his life and times in Led Zeppelin in a special new issue of Bauer Media’s Planet Rock magazine. The title, available on Friday (February 16), is set to publish four collector’s covers to mark the 50th anniversary of the iconic rock band.

In the world exclusive interview – part of a 22-page feature, including a new photo shoot - band leader Page, 74, addresses whether or not he thinks the band would ever reform to play a gig.

“I very much doubt it,” Page told Planet Rock. “You've just got to face facts. We've gone past the tenth anniversary of the 02 [show], where we managed to do one serious concert. That's the only thing that we've done for such a long time, so I very much doubt we'll do anything else. I really think the time has gone.”

“I can't give the game away, but there's a recording that’s another multi-track that we'll release,” said Page. “It's so different to all the other things that are out there. It's another view compared to How The West Was Won or The Song Remains The Same. I'm looking forward to people hearing that. There's a lot of stuff to come out, a number of releases. I'd like to say that they'll be coming out over the next 10 years. There's more to come for sure.”

Speaking about the forthcoming Led Zeppelin by Led Zeppelin book, due in October, he added: “I'm really pleased that we're all doing it collectively because there are so many other people doing books. There's about ten that I know of that are coming, which is pretty ridiculous! It will be really good to have an authoritative book, where the band are actually contributing to it rather than being ripped off.”

Commenting on the issue, Planet Rock editor Paul Brannigan said: “We wanted to round off the inaugural year of Planet Rock magazine in a genuinely special manner, and what better way than by paying tribute to the greatest, most iconic hard rock band of them all? With Led Zeppelin celebrating their 50th anniversary in 2018 we’re honoured to have a world exclusive interview with their visionary leader Jimmy Page, who sheds light upon both the quartet’s illustrious past and their as-yet-unwritten future. Given Zeppelin’s magical alchemy it seemed appropriate to salute each of the four band members with their own bespoke cover. We hope that these beautiful covers and the epic, revelatory 22-page Zeppelin feature within will serve as a fitting celebration of both this singular, legendary band and indeed Planet Rock's own distinguished louder-than-life ethos.”

The new issue of Planet Rock will be available with four embossed black and gold foil covers carry the Led Zeppelin logo along with a design that together configures to make a zeppelin airship. Each of the four covers bears the unique symbol chosen to represent each of the four band members – vocalist Robert Plant, guitarist Jimmy Page, bassist John Paul Jones and late drummer John Bonham - on the Led Zeppelin IV album.