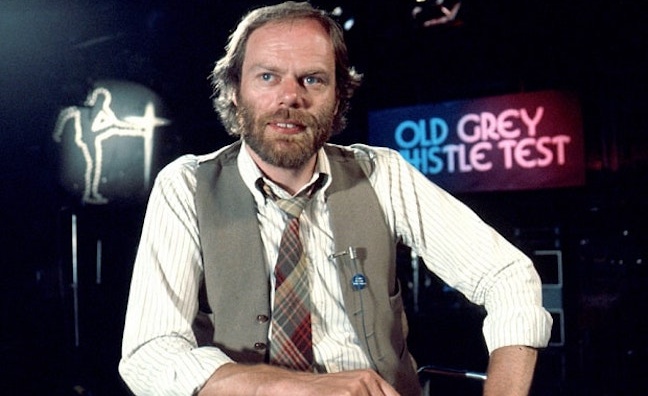 BBC Music and BBC Four have unveiled a line-up of programmes for the months ahead, including a celebration of the Old Grey Whistle Test.

Old Grey Whistle Test Live: For One Night Only, hosted by Bob Harris, is a live three-hour show at 9pm on February 23 with music, special guests and rare archive to mark 30 years since the legendary series was last broadcast. Produced by BBC Studios, the show returns to its original home of Television Centre in White City in a recreation of the programme’s early incarnation.

There will be music from Peter Frampton, Richard Thompson, and Albert Lee, who all performed on the show. Harris will also interview guests including Dave Stewart, Ian Anderson, Kiki Dee, Joan Armatrading, Chris Difford and Danny Baker, along with singer Mollie Marriott, Pink Floyd animator Ian Emes and Mike Appleton who produced the original series.

Other former presenters – including Annie Nightingale, Richard Williams, David Hepworth and Andy Kershaw - will also feature, sharing stories of their time on the series. The one-off show will have online viewer vote for the performance the BBC Four audience would most like to see again.

Bob Harris, who presented from 1972-78, said: “Old Grey Whistle Test was such a magical time. It produced so many firsts for music television, whilst forging friendships for me that have lasted ever since. I can’t wait to get back in the studio and relive those wonderful memories and introduce some great new performances.”

Caroline Wright, editor, Entertainment Projects, BBC Studios, added: “Old Grey Whistle Test was one of those unique shows that always felt like it was owned by its audience, consistently attracting the biggest and most enduring bands throughout its entire run and often introducing acts to British audiences for the first time. Drawing on the show’s unbelievable back catalogue of wonderful performances and guests, Old Grey Whistle Test Live: For One Night Only will celebrate this legendary series.”

Other music commissions for BBC Four include Africa: A Journey Into Music, which explores the music of Mali, Nigeria and South Africa with presenter Rita Ray. In The 80s Pop Road Map (working title), Midge Ure and Kim Appleby go on the road to make a case for it being a revolutionary musical decade in British pop history.

Cassian Harrison, channel editor, BBC Four, said: “In a world of infinite music choice, BBC Four is the home of music on the BBC. I’m delighted to be celebrating one of the innovators of the genre, Old Grey Whistle Test with this one-off special which is sure to reaffirm the series’ legacy. Rita Ray’s exploration through Mali, Nigeria and South Africa will bring insight and context to the incredible music from these countries. And Midge Ure and Kim Appleby’s journey round the UK will give a fresh and innovative look at the music from the seminal decade that was the 80s.”

Old Grey Whistle Test: For One Night Only is a BBC Studios production. The programme is executive produced by Caroline Wright. It was commissioned for BBC Four by Jan Younghusband, head of commissioning.

Africa: A Journey Into Music is a Sundog Pictures Ltd production. The 80s Pop Road Map (w/t) is a True North production for BBC Four.