"It's become a really important project to us!" Claudia de Wolff takes us inside Vevo's Halloween bash 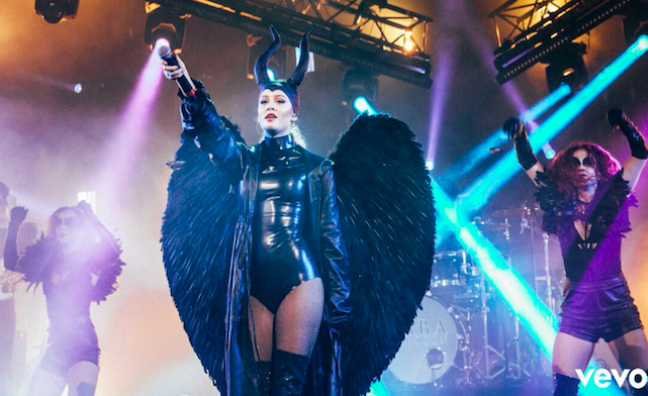 This weekend (October 28), Vevo’s fifth annual Halloween bash will takeover Victoria Warehouse in Manchester. Drawn from Vevo’s successful LIFT programme – which helps tell the stories of the most promising new musical talent – this year it boasts a line-up including Rag‘N’Bone Man, Jonas Blue, JP Cooper, Yungen plus Rat Boy all performing in full fancy dress. Yet this is not just a bit of fun. With previous performers including Sam Smith, Lorde, James Bay, Years and Years and Zara Larsson (pictured), individually-catered stage and lighting show for each artist, and (undead) hordes of people set to watch live both in the venue and on the net, this is one event that requires a lot of planning. Here Claudia de Wolff, (VP, creative content and programming, Vevo) takes us inside one of the best night’s on the music calendar…

Where did the idea for Vevo to make a big virtue of Halloween come about?
“It came out of quite an organic conversation. Each year we work with five artists as part of our LIFT campaign, which is our flagship original content series, which allows the artists access to our audiences and to make some really interesting creative work with them. As part of each LIFT campaign we make a series of films with the artist, some are more narrative based around their story and where they’ve got to and their backgrounds. We realised that within this – connecting them with our audiences digitally - we also wanted to serve a real world experience for fans of the artists to see them in the flesh. It felt like a really natural fit to do something in Q4 where we can have all the artists come together. Halloween’s a really unique opportunity – where people want to go out, celebrate and party.”

What do you get out of putting it on as a brand and platform?
“Does it sound weird if I say satisfaction? It’s become a really important project to us – it’s something we work on for a huge amount of the year, really. We have a creative team that work on it from midway through the year trying to think of interesting themes and staging. A huge amount goes into it. A lot of brainstorms, working groups, themes, and looking for interesting venues to takeover that aren’t traditional concert venues but places we can make into our own for the night. Last year, we went to Liverpool and took over Bramley Moore docks, there we had to bring in everything from water to power to toilets. It was a huge undertaking. We wanted to really go to that extra level of detail, last year we really went to town on dressing the venue, set designers that work with us. We want to constantly surprise people and offer them more than you expect when you just come to a normal music event. It’s really about the celebration of the artist and the audience as well. There’s a small booking fee to cover the admin of the ticketing itself, but we wanted to keep it a free event because we wanted to make sure there are no barriers to entry for the audience. The idea is that this event is accessible to everyone. We’re a digital perform, but real world events offer something really different. That’s something we wanted to offer audiences.”

You’ve had huge names involved in the past including Lorde and Sam Smith – what feedback did you get from people who’ve done it in the past?
“We’ve worked with some huge artists but at the time they were just at the beginning stage of their careers. This was one of the first things Lorde had ever done with us in the UK. At that point we were trying to introduce them to Vevo’s audience both digitally and in the real world sense, so there’s an element of growing their audience. Also, the amount we put into production, lighting and set design for each artist is a really big pull for some artists. Last year Jack Garratt couldn’t believe the amount of work we’d gone to in order to pre-programme the lights for his entire set. That’s something that we do at every Halloween event now. Each artist has their own set design, with the lights all programmed for them.”

We’re a digital perform, but real world events offer something really different. That’s something we wanted to offer audiences

You’ve got some huge breaking artists this year, including Rag’N’Bone Man. How do you schedule it so they can all attend?
“It’s something we do when we choose the LIFT artist cycle – it’s one of the requirements that the artist make themselves available on the day of the show, and the show is always in the calendar for the nearest Saturday to Halloween. So when we have the initial conversations about getting artists involved with Lift we’ll ask if they can lock the date in the diary. Obviously we have a lot of good history with labels, artists and managers – people are really keen for artists to play the event having seen the level of production and size and scale of what we’re producing.”

What do this year’s line-up have in store for us, then?
“There’s five full sets, which is great! Each artist will be onstage for half an hour, and they’ll all have their unique and feel to staging and design. I think what we’re also looking at this year is variety and that they’ll all bring something different. Yungen is a really energetic performer, he’s just had major success in the past few weeks with his song Bestie. It’s a really exciting time for him. Looking at his trajectory he’s really building an audience outside of London so I think he would be really well received. JP Cooper is from Manchester and I think he’ll have a good home crowd with him – we shot his whole Lift campaign in Manchester and involved a lot of his friends who had been with him on his journey, so it’s nice for him to have the opportunity to perform and celebrate with them. Rag’N’Bone Man has obviously had a phenomenal year, he was the earliest LIFT artist we worked with, we filmed the campaign with him in January. He’s an artist a lot of people are excited about seeing on the night. Jonas Blue has had phenomenal success, especially on digital platforms, the numbers on his videos are absolutely monumental and now it’s really about giving him the space as a live artist as well. Lastly, Rat Boy… Who knows!? They put on a really fantastic show – I’m interested to see how it translates into a Halloween space!”

What’s been the response of the industry to the LIFT campaign as a whole?
“We’ve had a fantastic relationship with the industry around LIFT, we’ve made some incredible pieces of work. Pieces I’m really proud of still. We interviewed Lorde earlier in the year as part of something we did and she still remembers the time we put her underwater as part of her lift campaign four years ago, and that still stands out to her. Or look at Sam Smith’s comeback this year, the amazing stripped performance we did with him is now up to 20 million views. The longevity of the content we’ve made with these artists that’s gone on to have monumental global success. LIFT has a great history, a great reputation and it’s something we’re continually striving to make great pieces of work on. What we try to do with Lift in each scenario is to give the artist the opportunity to do something that they’re not going to get to do elsewhere, every artist at this stage is going to be sat on the sofa and be asked the same 10 questions by the majority of media outlets, so it’s what can we really do with them that lets us tell a different part of their story. I think a good example of that this year is the piece we did with JP Cooper where for the first time he spoke about losing his mum as a young child. We created a really touching, poignant view of how he became a musician and what music really means to him.”