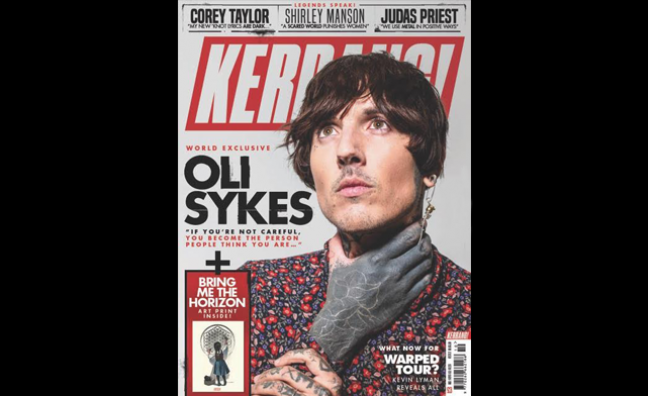 Kerrang! has announced plans to expand domestically and in America following investment from its independent owners Wasted Talent Ltd.

The weekly rock title, which moved from Bauer Media last year, is set to open a US office for the first time and has unveiled a new team to work across print and digital.

Kerrang! will mark the news with the launch of a revamped print product on Wednesday, March 7.

The redesigned version of the magazine features increased pagination and a thicker, matt-varnished cover. Every issue will come with an exclusive art-print.

Headlined by an eight-page cover story each week, the features section has been expanded to reflect the title’s standards in photography, access and journalism, while the reviews section is intended to add greater context to the music celebrated by the magazine.

Kerrang! Editor, Sam Coare said: “We spoke to our audience to find out what they wanted from the magazine, and allowed them to shape what we do. You will see that in the new, forward-looking version of the magazine we have created. We also believe that there is a new breed of artists emerging in Kerrang!’s world, and we look forward to creating new, innovative ways in which we can champion them.”

Coare’s team will work across both the magazine and of Kerrang!’s digital properties. Nick Ruskell has been promoted to senior editor in-charge of reviews, playlists, new music and track premieres, while Emily Carter has been appointed news editor across all platforms.

The brand’s recently redesigned website, Kerrang.com, is headed up by digital editor Bob Foster, previously employed at Vice. Foster will work closely with the New York office that will be run by Ethan Fixell, who has been appointed US executive director.

Fixell’s role is designed to expand Kerrang!’s presence in America through US-centric content, events and brand partnerships, and he will report directly to Kerrang!’s global creative director, Phil Alexander, who oversees the UK and US businesses from London.

Kerrang!’s content will also feature video programming, including exclusive performances that will be live-streamed around the world. Further video features are currently in production, while the Kerrang! app is set to launch soon.

Kerrang! hopes to grow its current reach of 35 million per month as the brand develops further.