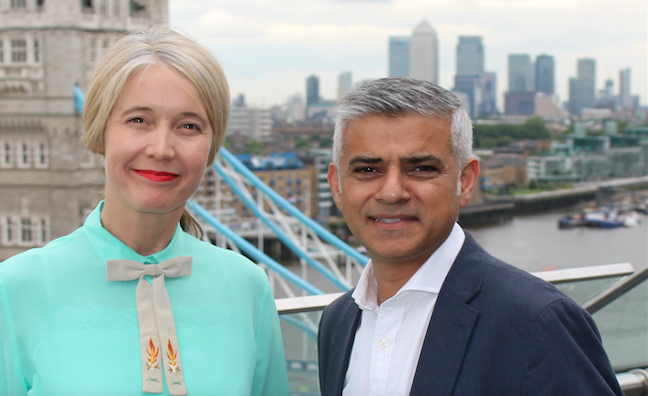 The Mayor of London, Sadiq Khan, has appointed Justine Simons OBE as his deputy mayor for culture and creative industries.

Khan has pledged support for the arts, culture and creative industries as one of the ‘core’ priorities of his administration. He has set out an ambitious programme to support the sector, including championing the night-time economy, launching creative enterprise zones and protecting vital music venues.

Simons has worked at a senior level in London’s cultural sector for over two decades, both in policy and as a practitioner. She played a significant role in delivering key cultural initiatives, including the 2012 Olympic Festival, the Fourth Plinth Commission, and she established the World Cities Cultural Forum, a major international network of 33 world cities.

Currently head of culture at City Hall, she has previously worked in the dance sector as a producer and director and has also championed culture as a crucial element to London’s economic prosperity.

“London’s rich creative scene is a major area of economic activity, boasting world-class talent and institutions, and is a vital ingredient in our city’s success,”Khan commented.“It is crucial that this vibrant sector continues to grow, and it is one of my core priorities to help it do so.

"In the fallout from the EU referendum, our city’s cultural well-being has ever been so important especially through its power to bring communities together, and to ensure our on-going status as a globally attractive destination for business. Justine is a tour-de-force in London’s cultural scene, and she shares my passion to ensure culture is at the heart of city life.

"I am delighted to have Justine on board to deliver my ambitious programme at such a critical time.”

Simons added: “It’s been my lifelong belief that creativity has the power to transform lives and places. Culture is part of London’s DNA. It’s a big reason so many of us choose to visit and live here, it generates billions for our economy and gives London its unique character and dynamism.

"The Mayor has done something unprecedented for a global city - he has made culture a top priority and his goal is to embed it in regeneration, planning and infrastructure. It is now more urgent than ever to unlock the potential of culture to build bridges and bring people and communities together.

"We must maintain the flow of ideas and creative talent and shore up our cultural economy. So I am thrilled to be given this chance to deliver Sadiq’s ambitious cultural vision and secure London’s future as a global role model.”

Yesterday saw Culture secretary John Whittingdale MP put forward a post-Brexit statement on how culture (as well as the media and sport), will be affected, calling the DCMS sectors "some of the strongest and fastest growing".

He said that "it is important to re-emphasise that there will be no immediate changes", but did add that the Government "will support our sectors in seeking new arrangements which will maintain our trade relations and encourage them to look for new opportunities".

Whittingdale said: "The British people have voted to leave the European Union, and the Government are now united in delivering the result and making sure that we secure the best possible future for the UK.

"We will continue to look outward and to work with our European neighbours, as well as playing our full part in the world directly and through our role in organisations such as the UN, NATO, G7 and G20.

"Britain’s economy is fundamentally strong and the Bank of England has set out the steps they are taking to reassure financial markets. It is important to re-emphasise that there will be no immediate changes and that there will also be new opportunities for the UK which we will seize".

Whittingdale - who campaigned for a Leave vote - previously stated that British music would continute to "thrive", when speaking at the UK Music reception at the House Of Commons. "This is probably the last event taking place in the House Of Commons before what happens in a week’s time and the world may or may not be different,” he said. “But the one thing which I’m absolutely certain about is that British music will go on continuing to thrive.”