Matt Hancock: 'There is no better party for the biz than Conservatives' 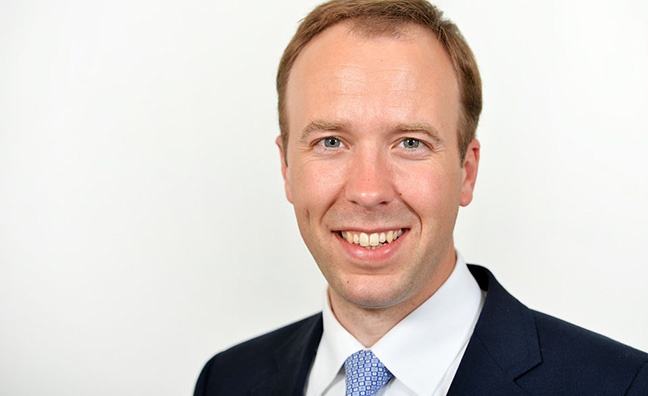 Yesterday, Liberal Democrats’ digital economy spokesperson Lord Clement-Jones told Music Week why his is the “party of the creative industries” ahead of Thursday’s General Election. Today, Conservative MP and Culture Minister Matt Hancock takes the hot seat, as we ask him how the music industry will benefit from a Tory Government, should they claim victory at the polls.

What do consider to be the most pressing issue facing the music industry at the moment, and how do you plan to address it should you win the election?
The British music industry has been a huge success over the past few years. It’s been through a difficult time commercially with online, but that’s really coming back now as more people sign up to streaming. We want to see world class creativity leading the world in music that works commercially too. I think we’re in a really good place to have an exciting future. Making sure that creators get rewarded properly for what they do [is a top priority]. The protection of their intellectual property, making sure they can sell online and get rewarded for doing that. Those protections are incredibly important. We also want to make sure our vibrant live music scene continues and we have put £300 million into music education in the last six months and we want to see that spent well so that everybody can get a good grounding of music when they are in school.”

How do you plan on ensuring artists are able to continue touring unencumbered in the wake of Brexit?
We’re going to have to have a new immigration system and we’ve got to make sure the brightest and the best can still come here and that it works effectively.

Labour has committed to a £1 billion Cultural Capital Fund to bolster the infrastructure of the music industry over the long term. How will the Conservatives back the market?
We have protected the budget for the arts and we are going to introduce a Cultural Development Fund. This is about making sure arts funding gets to places that maybe haven’t had their fair share in the past so that it can support development and reach all parts of the country. You can only afford to do that if you have a strong economy to back it up and that you know how you are going to pay for these things.”

How much money exactly will you commit to that Cultural Development Fund?
We haven’t put a figure on it.

Do you think music tourism to the UK could it be hit hard by Brexit?
No. I think we can make a success of that. Music tourism brings people in from all around the world. It’s an incredibly important export both in money terms and British influence around the world. We see it going from strength to strength.

How do you plan on continuing the fight against secondary ticketing?
I’m incredibly proud of the measures that I put through to make bots in secondary ticket markets illegal at scale. It has become a big problem, so I’m delighted that the last law Parliament passed before the election was the law to ban secondary ticketing harvesting in large numbers by bots. I hope that we can win the election so that we can see that put into practice. It’s a big step forward and it’ll have a big impact, but we have to remain vigilant so that real fans can get hold of tickets without being ripped off.

Why should the music business vote Conservative?
For supporting creators of content, for supporting creativity there is no better party than Conservatives. For making sure you can not only learn music but also make a living out of it. We’ve worked hard to support the British music scene over the past seven years and we have some exciting ideas to help it go from strength to strength.