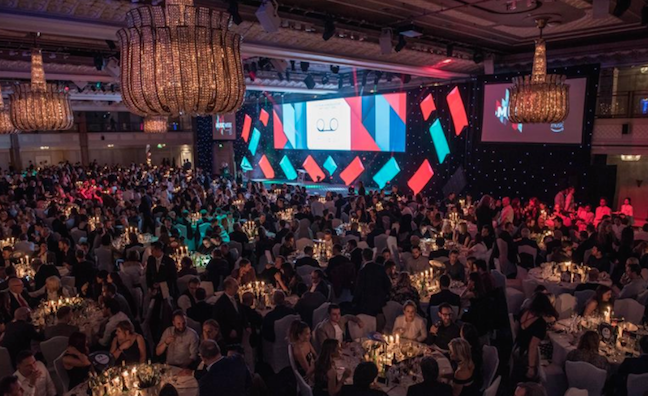 The 2018 Music Week Awards attracted an unprecedented number of entries before the deadline closed on Wednesday (January 17), setting the scene for the event’s biggest edition yet. We are delighted to announce that the number of submissions received this year were up an astonishing 20% on 2017.

Speaking about the rise, Music Week editor Mark Sutherland said: "2017 was a massive year for the music industry and that's reflected in the huge number of entries we've received. The standard this year is incredibly high as well, meaning the best of the best will be in the frame for awards at this year's ceremony. We can't wait."

Music Week’s team of experts is now examining the record-breaking haul of nominations ahead of the April 26 ceremony held at the Grosvenor House Hotel in London. The shortlists for each category will be announced in the next few weeks, so stay tuned to musicweek.com and our social media feeds for updates and announcements.

Bookings are now open for the event and we strongly encourage people to book as soon as possible to avoid disappointment - 2017’s ceremony saw a sell out room on the night with more than 1,200 guests attending, and 2018 is set to be even bigger.

The awards are peer-voted and judged by panels of specialist judges. As ever, labels will be competing in some big categories, including Artist Marketing Campaign, Catalogue Marketing Campaign, Music & Brand Partnership, Sales Team Of The Year, Promotions Team Of the Year, Record Company and Independent Record Company, while independent and major publishers will be up against each other for Publisher Of The Year.

Each year, The Strat is also bestowed upon a winner by the Music Week team for a lifetime of achievement across the industry. Last year it went to First Access Entertainment founder and CEO Sarah Stennett.