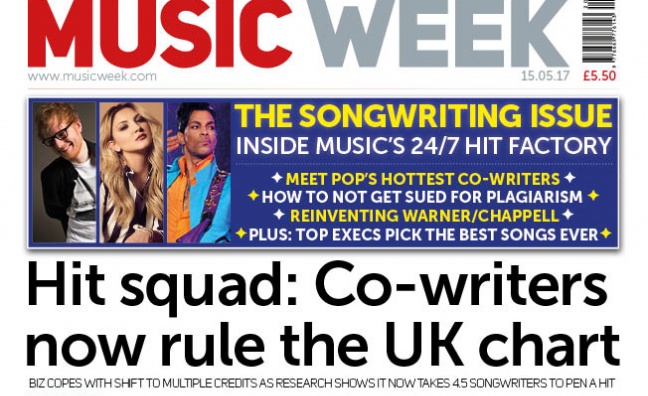 The new edition of Music Week, out today, takes a special, in-depth look at the business of songwriting.

On the cover, we examine the unstoppable rise of multiple co-writing credits. With contributions from the likes of  Sony ATV's Guy Moot, BASCA CEO Vick Bain and Imagem Music MD Kim Frankiewicz, we reveal how many songwriters, on average, it took to make a hit record in 2016.

This week's Big Interview is with Mike Smith, MD of Warner/Chappell UK, who has worked with everyone from Supergrass to Skepta. We also speak to some of the biggest co-writers in the game to uncover the secrets behind crafting the perfect pop song while, to celebrate the Ivor Novello Awards, we asked top names in the biz to name the best song ever written.

We meet songwriter/producer Jamie Scott, a key figure in countless breakthroughs from One Direction to Rag’N’Bone Man, PRS For Music CEO Robert Ashcroft explains the mechanics behind making sure the right people get paid for their creative efforts, while Steven Tregear and Victoria Armstrong of Music Week Award-winning law firm Russells Solicitors give their thoughts on why, unlike the US, the UK has not witnessed a deluge of plagiarism claims since the controversial Blurred Lines copyright infringement ruling of 2015,

We also investigate why the country music scene is leading the way in turning songwriting talents into solo artists and chat with Jo Hart, founder of radio plugging company Hart Media to find out how the company has evolved to overcome the many changes in the radio world over the past two decades as it celebrates its 20th anniversary.

Elsewhere, we talk to songwriter and Girls I Rate founder Carla Marie Williams about how the industry can provide more opportunities for young female songwriters and bring news on The Unsigned Music Awards’ new Great Escape agreement with Live Nation.

In other news, following on from their first ever UK show at London’s Koko last week, TLC’s manager Bill Diggins gives the inside story the multi-million selling R&B group's return to the global stage, and the team behind The Kooks explain how the indie heroes have become bigger ticket-sellers than ever ahead of their first UK arena tour.

Singer/songwriter Jerry Williams is On The Radar, while Google and Noonday Underground occupy our latest Sync Story slot.

As well as all that, there’s also the very latest charts, analysis and news.