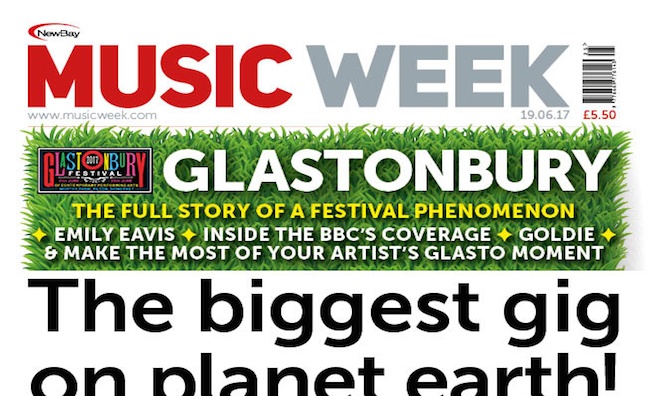 The new issue of Music Week is a Glastonbury special, packed with everything you need to know about this year’s show and why the Worthy Farm event is still regarded by so many in the industry as the most important gig on earth.

On this week’s cover, we have a raft of leading executives exclusively discussing why they believe Glastonbury is the biggest commercial opportunity in the world for artists, while the festival’s very own Emily Eavis takes the Big Interview, as she updates us on the event’s future and offers her take on why it is still the UK’s hottest festival ticket.

Meanwhile, the BBC talk us through their plans for extensive coverage across TV, radio and social media, as the network looks to build on last year’s record-breaking audiences.

On top of that, we hear from the people behind Travis, Christine And The Queens and Skepta’s breakthrough Glastonbury moment, while UK DJ icon Goldie tells us about his return to the festival and why it remains such a crucial platform for artists.

Furthermore, this week’s On The Radar act, Shame, will be looking to make the most of their Glastonbury appearance at the weekend.

Elsewhere, we speak to the team behind the astonishing legacy of Meat Loaf’s Bat Out Of Hell as the musical version launches in the West End; AIM speaks to us exclusively about the organisation’s restructure, which includes the arrival of a new chairperson in the form of Transgressive co-founder Tim Dellow and the assembly of a new management group; and Syco Music managing director Tyler Brown reveals details of the label’s new signing with Ina Wroldsen.

Plus, First Access Entertainment CEO Sarah Stennett gives us the inside track on the company’s new agreement with Warner/Chappell and a host of industry executives and artists pay tribute to the late Nigel Grainge, who passed away at the age of 70 last week.

In addition to this, we have the very latest sync deals taking the biz by storm, along with our weekly chart analysis.