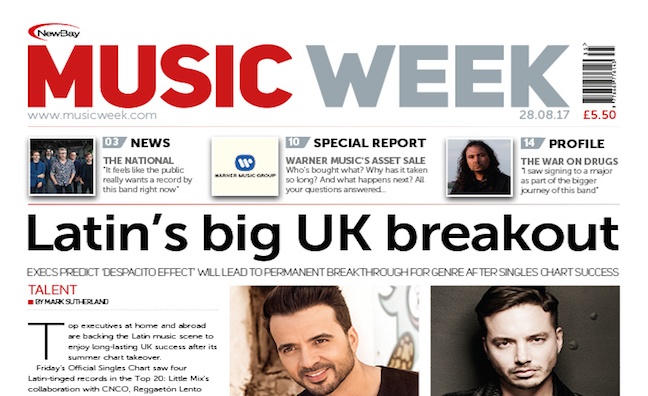 This summer, Latin music has made a significant impact on the singles charts and Music Week digs deep into the sector in this week’s cover story.

Leading executives involved with acts including Luis Fonsi and J Balvin explain the phenomenal rise of Despacito and other tracks, predicting the genre’s impact on the charts will continue.

Elsewhere, we profile independent publishers Kobalt and BMG and bring you the inside track on The War On Drugs’ move from Secretly Canadian to Atlantic for new album A Deeper Understanding. Frontman Adam Granduciel is interviewed alongside the band’s team.

In news there’s an inside look at The National’s new album campaign, BPI chief executive Geoff Taylor on the BRIT Awards 2018 and an interview with long-serving BBC exec Rhys Hughes as he scores a big promotion. We also get the lowdown from Caroline International and Steven Wilson on the prog rocker’s Top 3 album.

On The Radar this week are indie/folk trio Wildwood Kin, while The Independent’s Roisin O’Connor is this week’s Tastemaker. Our sync story comes from Sky Sports and The Luka State.

Plus, there’s all the very latest, news, charts and analysis.