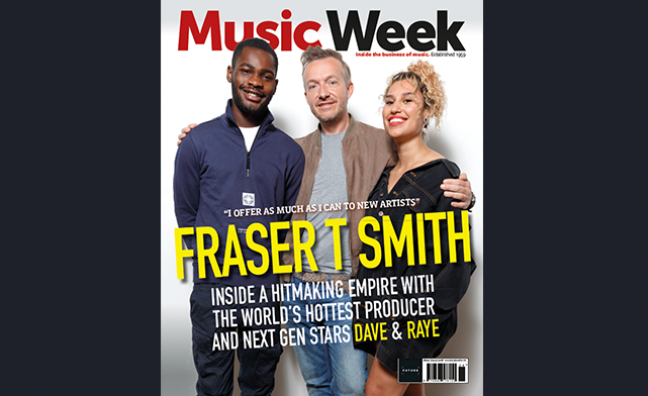 The new issue of Music Week is out now, with the world's most in-demand producer and two of the UK's most exciting emerging artists gracing the cover.

We join the Grammy-winning Fraser T Smith in his studio with rapper Dave and pop star Raye to delve into the story of his most successful years yet and learn the tricks that have turned him into an essential cog in new music.

In news, we speak to Dirty Hit's Jamie Oborne and Polydor's Tom March about the return of The 1975. Sony Music UK chief Jason Iley and George Ezra talk the singer's first No.1 single and the success of his second album, Staying At Tamara's, while Columbia marketing boss Alex Eden-Smith tells all about the singer-songwriter's hit podcast.

Meanwhile, Soundcloud CEO Kerry Trainor gives an insight into the service’s 'return to growth' after implementing a turnaround plan.

Elsewhere, we go inside the BBC Proms as it gets set to return for its 124th series, while DF Concerts boss Geoff Ellis discusses the expanded second edition of Glasgow city centre festival Trnsmt, which kicked off over the weekend.

With the imminent release of a new documentary, Whitney, Music Week investigates how the huge continued interest in the late Whitney Houston is being managed by her estate and family.

10cc's Graham Gouldman stars in this week's Hitmakers and PIAS Jane Third talks us through her life lessons in The Aftershow.

Vision Nine festivals coordinator Renae Brown occupies the Rising Star slot and Music Week's one and only Ben Homewood reveals his favourite new sounds in Tastemakers, while On The Radar focuses on pop icon-in-waiting Madison Beer.

Sync Story examines an ambitious project, as Ninja Tune and Just Isn’t Music collaborate with Codemasters on a 59-song soundtrack to new racing game, Onrush, and songwrite Amun is the latest brand new act to be Making Waves.

As well as all that, there’s all the very latest news, charts and analysis, including our brand new Apple Music charts.