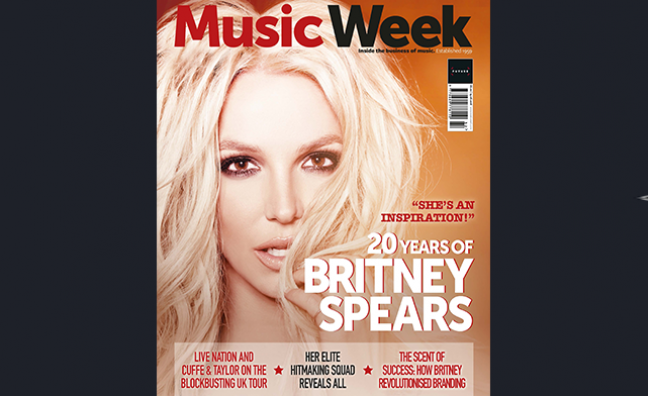 This summer, Britney-mania is sweeping the country, as Britney Spears tours the UK for the first time since 2011.

What’s more, this year marks the 20th anniversary of the release of the pop megastar’s debut single, Hit Me Baby One More Time. There’s only one way we could celebrate all that and more at Music Week, so this week, Britney graces our cover.

Inside, we delve into the machinations of a tour that is set to take the nation by storm, from the germination of the idea to its execution. Plus, we analyse the business of Britney Spears, and assemble an all-star cast of songwriters and producers to dissect some of the singer’s biggest hits.

Elsewhere, with breakfast show shake-ups happening left, right and centre, we have the very latest reaction to and analysis of the latest RAJAR figures.

This week’s Big Story collects a group of star names from the rock world, who give us their reactions to the end of the Vans Warped Tour and what it means for the UK biz and breaking artists in the US.

Also in news, there’s a big announcement at Virgin EMI, plus fresh developments at Townsend Music.

Drum and bass heads Sigma appear in our latest Hitmakers column to tell all about 2014 smash Nobody To Love.

There’s all the very latest news, charts, analysis and market shares as usual, and to cap another bumper issue, Public Image Ltd frontman John Lydon sounds off in The Aftershow.