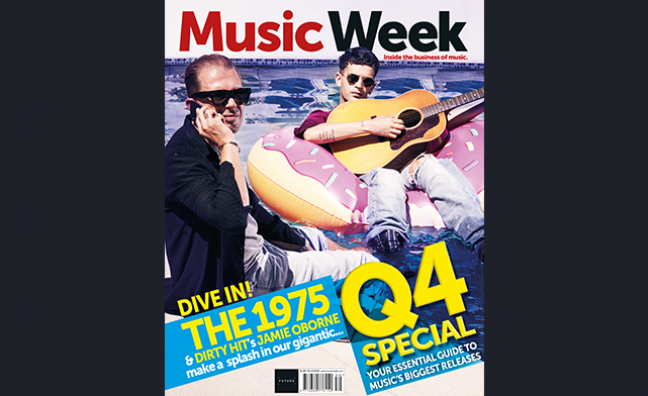 Running to a monster 92 pages, the new edition of Music Week features our annual Q4 preview as we look ahead to the biz's busiest time of the year.

The issue features your unmissable guide to every big release of the next three months as the industry heads into the vital Christmas sales season. Don't do any business until you've read your copy!

Gracing the cover is the dream team of The 1975 frontman Matthew Healy and his manager/Dirty Hit label boss Jamie Oborne. We catch up with the pair poolside in Los Angeles to preview the band's upcoming album, A Brief Enquiry Into Online Relationships, and unravel the bond behind their rise to the top.

Staying in the US, we head to Las Vegas for the inside story on how the residency model is finding favour with a whole new generation of artists. With original trailblazer Celine Dion’s record-breaking run drawing to a close next year, CAA music boss Rob Light and Chris Baldizan of MGM Resorts International chart live music’s lucrative love-in with the entertainment capital of the world.

In news, we report on the inaugural Music Week Tech Summit Together With O2 after more than 300 top executives descended upon the The O2 complex for lively digital debate and tech talk last week.

Elsewhere, despite a challenging year for the overall market in physical music, the retail sector speaks of its optimism about the Q4 release schedule, with the industry looking to bounce back from last year's disappointing final quarter, while Virgin EMI president Ted Cockle tell us how Queen’s Bohemian Rhapsody soundtrack will “lead the charge” for a major campaign to tie in with the new film.

Songwriter and producer Mark Ralph talks through Years & Years multi-platinum chart-topper King in Hitmakers, and singer Nick Jonas looks back on what he's learned so far in his career in The Aftershow.

The issue is available in all good newsagents. To subscribe and never miss a music biz story, click here.