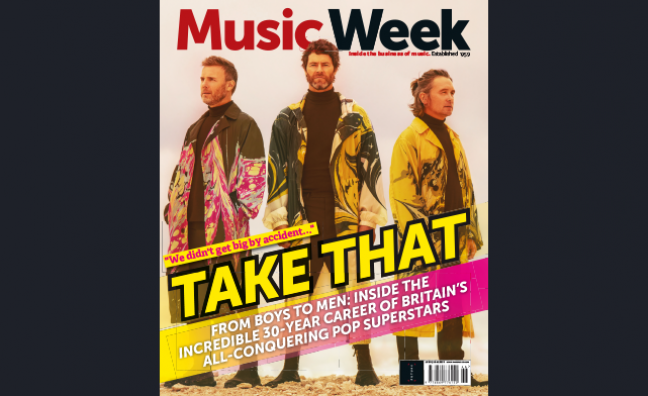 The new issue of Music Week is out now and is headlined by an extensive, career-spanning interview with pop royalty Take That.

We speak to cover stars Gary Barlow, Mark Owen and Howard Donald, along with Universal Music's David Joseph and Tom March, to talk three decades of hits and splits ahead of their 30th anniversary next year. We also take a look at their incredible success on the live circuit, with contributions from SJM Concerts MD Simon Moran, Kennedy Street Enterprises boss Danny Betesh, musical director Mike Stevens and creative director Kim Gavin.

In this week's Big Story we reveal the declining number of British artists to have reached No.1 in the albums chart this year and speak to leading execs about the challenges that presents the business.

We also take a look back at the highlights of the recent Music Week Women In Music Awards and present a special report on the hotly-contested ticketing industry.

In Hitmakers, singer-songwriter Kirty Bertarelli recalls penning the All Saints No.1 Black Coffee, while Absolute MD/co-owner Henry Semmence takes the spotlight in The Aftershow.