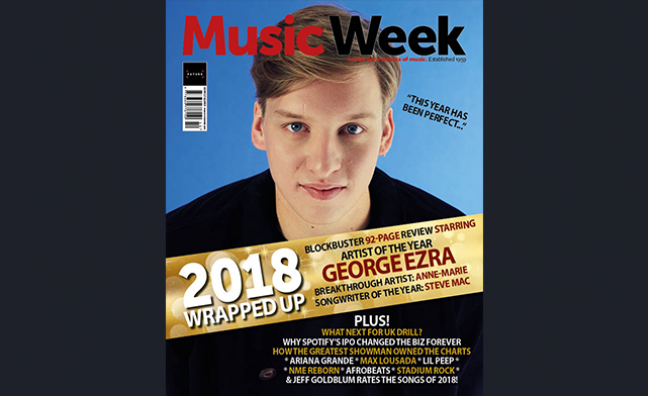 The new issue of Music Week is out now, and it’s an absolute Christmas Cracker.

A jam-packed 92-page festive jamboree condenses the biggest and best music industry stories of 2018 into a glossy yuletide bundle that’ll last you until January.

On the cover is our Artist Of The Year George Ezra, who has enjoyed a whopping 12 months with second album Staying At Tamara’s. Our cover story goes deep into the campaign with Ezra and his team, including manager Ryan Lofthouse and Columbia UK president Ferdy Unger-Hamilton.

Joining Ezra on our Christmas honours list are Anne-Marie, who is named Breakthrough Artist Of The Year and Steve Mac, our Songwriter Of The Year. We unravel the brilliance of both in the issue via exclusive interviews.

We relive 2018 in soundbites, with everyone from Max Lousada and Jason Iley, to Kacey Musgraves and Annie Mac rubbing shoulders in our Quotes Of The Year round up. Keep an eye out for Matthew Healy and, erm, Johnny Borrell, too.

To cap a great year, Strat winner Lousada takes on The Aftershow, too.

Elsewhere, we look back on 12 months that saw Afrobeats explode across the industry and ask what’s next for drill, as the scene’s major players come together to discuss the fastest lane in UK rap.

We drop in on the NME to see how its faring now it’s no longer in print, and reflect on a tumultuous period for radio in Britain.

There’s an in-depth look at musical legacies, while we put Spotify’s IPO under the microscope to find out how the biggest story of the year has really affected the biz.

With The Greatest Showman sitting pretty at No.1 once again, we’ve lined up a fresh take on the soundtracks boom. Spoiler alert: we’ve not seen the last of the OST.

We gather the biggest names in the live sector to rake over a bountiful year for stadium tours and look ahead to more of the same in 2019.

To top off a bumper issue, Hollywood legend and jazz superstar Jeff Goldblum rates the tracks that defined 2018.

Elsewhere, we take a look at diversity in the music biz in this week’s Big Story, while there’s big news from Ariana Grande’s camp and Atlantic Records UK.

In Hotshots, we present the photographs that defined 2018, we get festive in the Playlist and then there’s the small matter of Tweets Of The Year. Who will be crowned our Twitter champion?

As well as all that, there’s the very latest charts, news and analysis.

That should be more than enough to keep you busy until our first issue of 2019 lands on Monday, January 14. Merry Christmas and a Happy New Year!