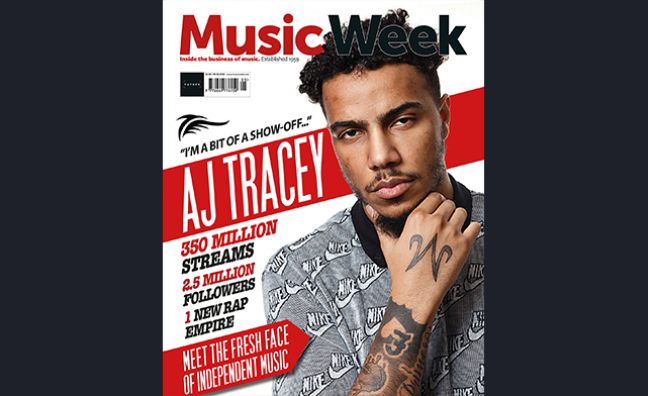 AJ Tracey stars on the cover of the new issue of Music Week, as we head to the West London rapper’s house to hear how he became the new face of independent music.

Over the past few years, the MC has become one of the biggest and best rappers in the UK, and he’s done it all independently. In our cover story, Tracey tells the story, with help from his close-knit team.

Tracey’s isn’t the only empire in the magazine this week, as we present a no-holds-barred interview with Eleven Seven Label Group founder Allen Kovac, who talks rock music and much more in an extensive chat.

We also sit down with star hitmaker Ed Drewett, who, after making records with Little Mix, One Direction, Craig David and more, is embarking on his first album campaign as an artist.

Talking of hits, they don’t come much bigger in 2019 than Ariana Grande’s Thank U, Next, which is dissected by co-writer and close Grande confidant Tayla Parx in the latest edition of Hitmakers.

Deviate Digital boss Sammy Andrews weighs in on influencer marketing in her new column, while we quiz Rolling Stones manager Joyce Smith in The Aftershow.

Our Big Story delves into the situation surrounding PledgeMusic, and there’s big news from Sony/ATV and a special tribute to former EMI and Columbia exec Rebecca Sichel-Coates.

Alongside all that, there’s the very latest news, charts and analysis.