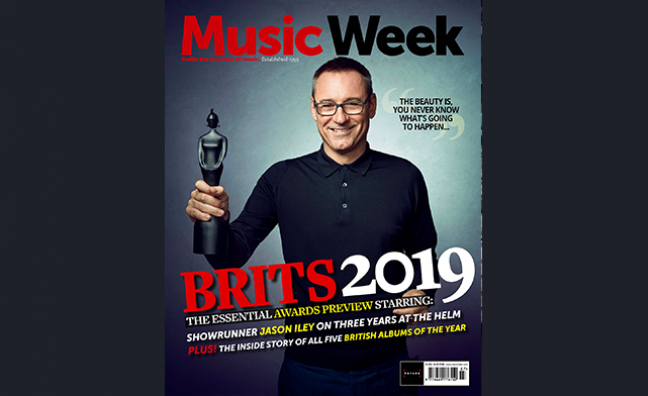 The new issue of Music Week is out now and is our special BRIT Awards preview edition, featuring an in-depth interview with Sony Music UK boss Jason Iley. As he prepares to helm his final event of a three-year stint as BRITs chairman, Iley looks back on his legacy – and discusses what his successor should look out for next.

In this week's Big Story, we unveil the hotly-anticipated shortlists for the 2019 Music Week Awards. Following hundreds of entries, the nominees have now been decided across 21 categories ahead of the May 9 ceremony at Battersea Evolution.

Additionally, BPI and BRITs chief executive Geoff Taylor explains how the “unique” awards show can encourage ITV audience to discover streaming, while Idles manager Mark Bent tells us why the group’s BRIT Awards nomination cements their entry “into the belly of the beast”.

In a five-page feature, Music Week talks to the key players behind the the five records in the running for the BRIT Awards’ Mastercard British Album Of The Year. We also catch up with the official next big thing in music, 2019 BRITs Critics' Choice winner Sam Fender.

This month sees the 30th anniversary of the BRIT Trust and its chairman, John Craig OBE, gives a Viewpoint on why the money raised by the BRITs is more important than ever. Elsewhere, in a special report, we look at the threat posed by piracy to the music business – and the people fighting back.

Jin Jin recalls Jess Glynne's first solo No.1 Hold My Hand in this week's Hitmakers and Blue Raincoat Music chief Jeremy Lascelles sits down for a grilling in The Aftershow.

Rising soul star Hamzaa takes the On The Radar slot, Sync Story looks at the cheeky link-up between Paddy Power and The Charlatans starring Rhodri Giggs, brother of the Manchester United legend, and Another Sky are crowned this week's hottest brand new act in Making Waves.