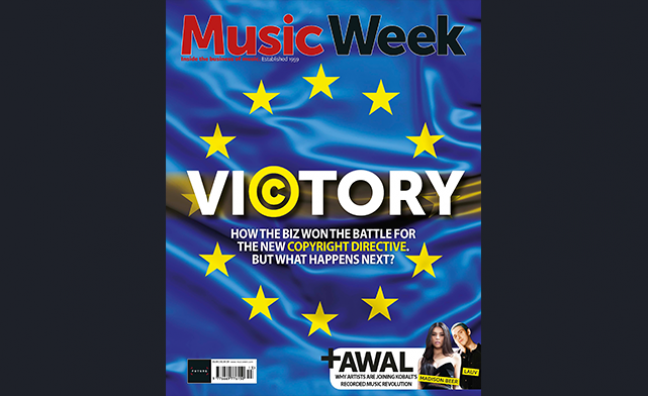 Two stories share top billing in the new issue of Music Week, which is out now.

In the Big Story, leading industry figures look ahead to a significant increase in streaming revenue following the crunch EU vote on the Copyright Directive as we reveal the next stages for the historic piece of legislation. Meanwhile, in the Cover Story, top execs from Kobalt's AWAL company give the inside track on an industry revolution as Willard Ahdritz, Alison Donald, Paul Hitchman and Lonny Olinick reveal all about their plans to shake up recorded music.

We also go behind the scenes at Austrian ski festival Snowbombing with Broadwick Live chief Gareth Cooper ahead of its 20th edition next week, while Blink-182's Mark Hoppus and All Time Low's Alex Gaskarth reveal all on their new Simple Creatures collaboration.

There's some huge news from RCA president David Dollimore and former Kiss trio Rickie, Melvin and Charlie open up on their surprise switch to BBC Radio 1.

Pop prospect Liv Dawson is showcased On The Radar, Drift Records' Rupert Morrison reveals his favourite new sounds in this week's Tastemakers and The Nude Party are Making Waves.

In her latest digital column, Deviate Digital CEO Sammy Andrews grapples with the complex war of words over streaming rates, while the collaboration between Converse and Celeste is examined in Sync Story.