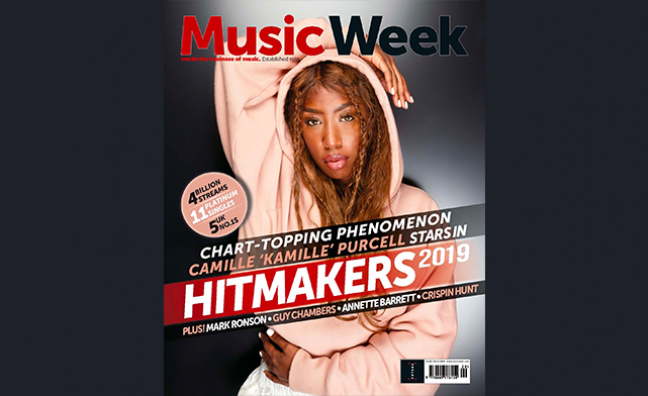 With this year's Ivor Novello Awards on the horizon, the new edition of Music Week is our annual special celebrating the world of songwriting.

In our Hitmakers cover story, we catch up with BMG’s songwriter extraordinaire Camille "Kamille" Purcell. Fresh from writing smashes for Little Mix, Clean Bandit and Mabel, we meet a rising star at the top of her game.

One half of one of the UK’s most successful songwriting partnerships alongside Robbie Williams, the legendary Guy Chambers takes us inside his first solo album, Go Gentle Into The Light, and reveals some of the secrets of his craft.

In addition, we ask a selection of big names from the biz to name the greatest living hitmaker, while Mark Ronson recalls the story of his monster global smash Uptown Funk and Reservoir/Reverb MD Annette Barrett shares some top tips from her storied career in music publishing in The Aftershow.

In news, we reveal the number of writers it now takes to create the UK’s Top 100 singles and explain how the new wave of artists could help slow the co-writing trend. Executives from Virgin and BBC Radio 2 hail the debut RAJAR performance of their new breakfast shows and Ivors Academy chair Crispin Hunt tells us why songwriters are more important to the music industry than ever.

Elsewhere, we revisit the industry's biggest night, the 2019 Music Week Awards, with a huge picture round-up and interviews with all the winners from a record-breaking night.

Sync Story looks at the partnership between Brewdog and Meshuggah, while Making Waves shines a light on musical omnivore Santi.