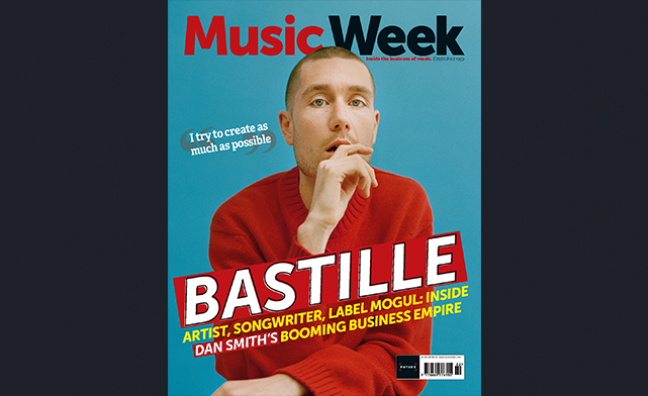 The new edition of Music Week is out now, starring Bastille’s Dan Smith on the cover. Inside we catch up with Smith to talk about his burgeoning music empire, and the group’s upcoming album Doom Days. Plus, there's campaign insight from Virgin EMI president Ted Cockle.

Elsewhere in the issue, we meet the reunited Shakespears Sister to get the full story behind their 2019 comeback and Deviate Digital CEO Sammy Andrews takes the music biz to task over the disconnect between different sectors of the industry in her regular column.

In news, we speak to the team behind the Spice Girls’ enormous stadium tour, including Simon Fuller and Simon Moran, plus we look at the launch of the Heart Radio breakfast show and analyse the rise and rise of events being held at historical venues around the UK.

KT Tunstall reflects on her global hit Suddenly I See in Hitmakers, while Hipgnosis founder and CEO Merck Mercuriadis looks back on his extraordinary career in The Aftershow.

Sync Story looks at the partnership between BT Sport and Wretch 32, while Making Waves shines a light on forward-thinking indie band The Snuts.