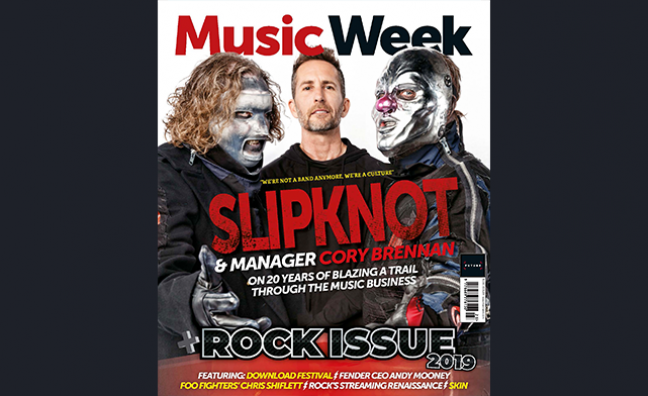 For those about to rock… the new edition of Music Week is out now, as we welcome metal titans Slipknot to the cover of the Rock Issue 2019.

As the Iowan band celebrate their 20th anniversary, we delve into their relationship with long-time manager Cory Brennan, as he and the group’s masterminds Corey Taylor and Shawn ‘Clown’ Crahan reveal all about their empire.

Slipknot are in the UK this week to headline Download Festival, and we quiz Festival Republic’s Melvin Benn and Live Nation’s Andy Copping about the rock extravaganza.

We gather a host of rock’s leading executives to find out how the genre is finally embracing the streaming revolution in this week’s Big Story, while there’s huge news from Virgin EMI and Island Records.

Few know more about fronting a rock band than Skunk Anansie’s Skin, who reels off her best stories in The Aftershow. In Hitmakers, Deryck Whibley tells the story of Sum 41’s pop-punk smash In Too Deep.

We check in on a new generation of noise, with maverick duo Black Futures in On The Radar and shouty Hastings crew Kid Kapichi in Making Waves.

ATC Management’s Matthew Greer tells us what it’s like to look after Frank Carter in Rising Star.

As well as all of that, as usual, there’s the very latest, charts, news and analysis.

The issue is available in WH Smith and other good UK newsagents now. To buy a copy direct, please email Rachael Hampton on rachael.hampton@futurenet.com.