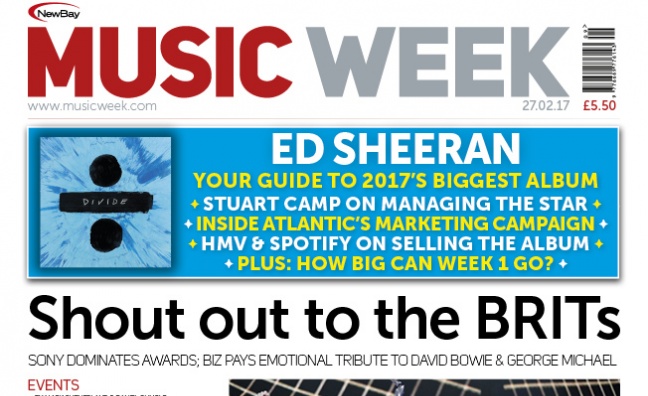 In the new issue of Music Week, out today, we speak to some of the industry’s leading executives to find out what they made of last week’s BRIT Awards.

Meanwhile, ahead of the release of what will likely be the biggest album of 2017, Ed Sheeran’s manager Stuart Camp takes the Big Interview, in which he talks ÷ and Sheeran’s journey to becoming one of the biggest stars on the planet.

Atlantic Records take us inside their campaign and we’ve also spoken to some of the industry’s top retailers and execs to see if Sheeran’s new record will deliver the ‘Adele moment’ of 2017.

Elsewhere, we zero in on the recently published 2016 Q4 RAJAR figures with some searing analysis and insights from the biggest voices in radio, while London’s first ever night czar Amy Lamé tells us about the biggest challenges and opportunities facing London nightlife.

The most exciting new talent is placed under the spotlight in On The Radar, and we also take a look inside the most innovative sync deals taking place in the market.

Plus, Alan Jones provides his weekly in-depth analysis of the latest charts.