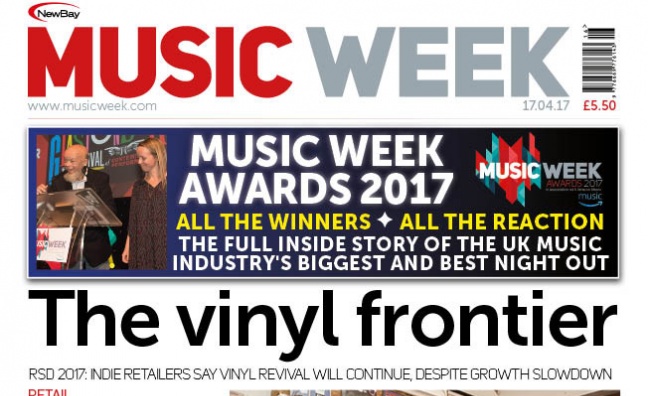 Inside the new edition of Music Week, as Record Store Day 2017 looms, a host of retailers insist the vinyl boom will continue, despite the first signs of a slowdown in growth.

Sony/ATV's new international president, Guy Henderson, tells us that his No.1 priority will be to spearhead significant digital expansion across both developed and developing territories, while BPI research director Chris Green explains that the rise in consumers paying for streaming services was the key to 2016’s revenue increase for record labels.

In events news, AIM CEO Paul Pacifico hails the “unique dynamic” that exists in the independent sector following the announcement of the seventh annual AIM Awards. Meanwhile, ahead of this year's MUSEXPO in Los Angeles, A&R Worldwide's Sat Bisla tells how the A&R sector will be thrust under the spotlight like never before at this year’s event, claiming that there are now more opportunities outside of the traditional music business than ever.

We have news on a partnership between UTA and Pinterest as part of Steps' comeback campaign, and report on  a brand new Writer Producer Fund for songwriters, launched by the PRS Foundation, in association with the BASCA Trust, which it claims will support a greater diversity of talent.

We tell the full inside story of the record-breaking 2017 Music Week Awards with reaction from all the winners on a massive night for the music industry.

Dance music power player Ben Turner talks the EDM explosion and the upcoming International Music Summit as he takes on The Big Interview, and Banquet Records co-founder Jon Tolley gives his view on what the vinyl revival means for the record industry.

As Skepta and Stormzy lead the UK underground into the mainstream, we speak to XL Recordings A&R Caroline Simionescu-Marin about unearthing their successors. And we hang out with Blondie as the legendary band prepares to hit the comeback trail.

Due to early print deadlines caused by the Easter bank holiday, we are unable to bring you this week’s Official Charts or market shares. The charts and our weekly charts analysis from Alan Jones will still be available at musicweek.com. We will reprint the Official Singles and Albums Charts next week.