Pink Floyd 'the perfect band for this kind of exhibition' 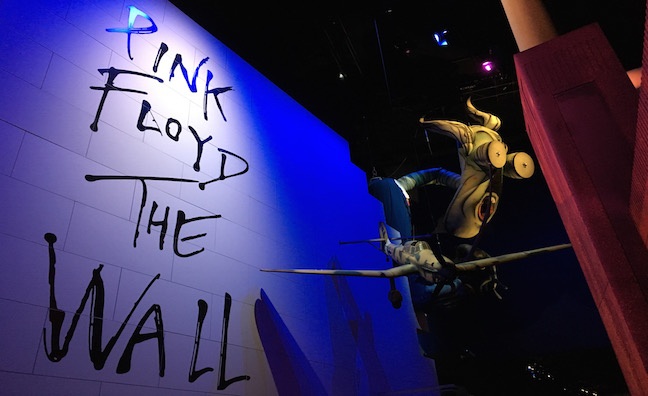 Aubrey ‘Po’ Powell, creative director of the V&A’s spectacular Pink Floyd: Their Mortal Remains exhibition, has spoken to Music Week about the challenges he faced in bringing the project to fruition and why there is no other band on the planet more suited to such an audio visual retrospective.

While Pink Floyd are by no means the first musical act to receive their own dedicated AV exhibition at one of the world’s foremost artistic institutions – both David Bowie and The Rolling Stones have been the subject of high profile exhibitions in recent years – nothing has come close to the scale and ambition of Their Mortal Remains.

Brimming with eye-popping visuals, holographic representations of artwork, rare artefacts and never before seen in-depth interviews with the band and those close to them, the exhibition bristles with visual, aural and technological innovation from the moment you set foot inside. Mapped out in chronological order, the journey starts with videos of band members and colleagues sharing memories of the Floyd founder and early creative driving force Syd Barrett, set to a backdrop of heady psychedelia evocative of their acid-fuelled UFO Club live shows in the late ‘60s.

Things then progress steadily through the years and the albums that followed by way of flying pigs, towering stage props, all manner of guitars and keyboards and a finale featuring live footage from the band’s now legendary Live 8 performance of Comfortably Numb. Though it took Music Week roughly an hour to get round the exhibition, hardcore fans keen to delve deep into the treasure trove of interviews and relics from the past 50 years could spend days exploring every nook and cranny of the immersive exhibit. You even get the chance to remix the Floyd classic Money via a series of mini mixing desks scattered around one of its many rooms.

In fact, the audio element of Their Mortal Remains is in many ways the most immersive aspect of the whole exhibit. Sennheiser's responsive headsets pipe in various pieces of music to soundtrack the experience in accordance with not just which room you are in but whereabouts in each room you are. Wander over to one of the many video screens and the audio from whichever interview is playing will take over automatically. Just like the band themselves, the individual members often take a back seat, allowing the full power of the music and visuals to take centre stage.

Speaking to Music Week about the project and the vast quantities of blood, sweat and tears that went into it, Powell, who has spearheaded the group’s artwork and live visuals for most of their career, said: “Pink Floyd are the perfect band for an exhibition like this. They were always known as the thinking man’s band; they weren’t just a three chord pop group. Look at each of their albums: Dark Side Of The Moon is about madness, Wish You Were Here is about absence and loss, then you go on to things like Animals, which is a really political statement, then The Wall, which is about the psychological wall between people, countries, emotions. The result of that is you have a wealth of intelligent material to work with, it’s powerful, psychological stuff. That’s what’s given Pink Floyd their longevity over so many other bands. It’s not just trite lyrics or visuals.”

Despite the difficulties that came with boiling 50 years’ worth of items and material down into a digestable exhibition, Powell said that each of the band members could not have been more helpful in allowing him to realise his vision.

“This project started with me getting piece of lining paper you use for wallpaper and getting a felt tip pen and drawing what I imagined it to look like,” he said. “It’s so incredible to see your little germ of an idea come to fruition. It’s better than I could have ever imagined.

“Pink Floyd have been unbelievably trusting. They have not interfered at all. Nick Mason has been incredibly helpful, because he had an archive of photographs going way back, which was very useful. A lot of the material of Pink Floyd hasn’t been archived properly, it’s been stored in boxes in warehouses and lock-ups, so I had to sift through what there was for months and months. At Roger Waters’ house I found the original lyrics for The Wall under a pile of paper. In a warehouse I found in a box a couple of inflatable pigs from The Wall show that were rotting and perishing.

“To see [the project] realised…They joy I’ve felt over the last week almost made me cry. It’s been a very cathartic journey for me, a nostalgic journey, but also a hugely precious one.”

Music Week also spoke to Pink Floyd sticksman Nick Mason about the exhibition and the work that's been put into it when the project was announced back in 2016.

“The opportunity to do an exhibition is exciting because it’s not just telling a story, it’s showing how the story worked. It’s not only about the history of the band, but also the technology that went along with it," Mason said. "We encompass a whole section of recording history. I hope there’ll be something for everyone.

“The band hasn’t been particularly involved in choosing what goes in, but more to the point, everyone has been looking through the archives to see what they’ve got. And, in fact, Roger found all sorts of bits and pieces that he’d forgotten he had. Also, David has a very good guitar tech called Phil Taylor who has kept a lot of equipment over years and years, which has been invaluable.”

Away from the exhibition floor, the ripple of Their Mortal Remains is also set to deliver a significant surge in Pink Floyd record sales over the coming weeks and months.

“[The exhibition] really allows the fans to reconnect with one of the most amazing bands of all time in an incredibly unique way,” Dan Chalmers, president of Rhino, East West and ADA at Warner Music. “I’m certain it’s going to benefit the catalogue. We’ve got a variety of different plans through the rest of the year; it’s definitely going to be one of the best years for Pink Floyd catalogue sales.”

Tickets for the exhibition are likely to be hard to come by when it opens on Saturday (May 13), such has been the demand for Their Mortal Remains, Victoria Broackes, V&A curator.

“We’ve sold around 45,000 tickets already,” she told Music Week. “Two months of weekends are already sold out and that’s beginning to put pressure on the days in between, which is very exciting. We’ve seen already with Bowie and with this one that people want to get in early and come on special days. It’s due to run until the beginning of October here and it’s very likely it’ll go on tour around the world. Bowie is about to go on tour to Barcelona, which will be its 11th venue, and that’s unheard of for us, it’s really rare to have an exhibition that goes on for that long. It’s truly spectacular.”

Tickets are on sale now at the V&A website.