Prize winners: What happened next for the 2018 Music Week Awards champions? 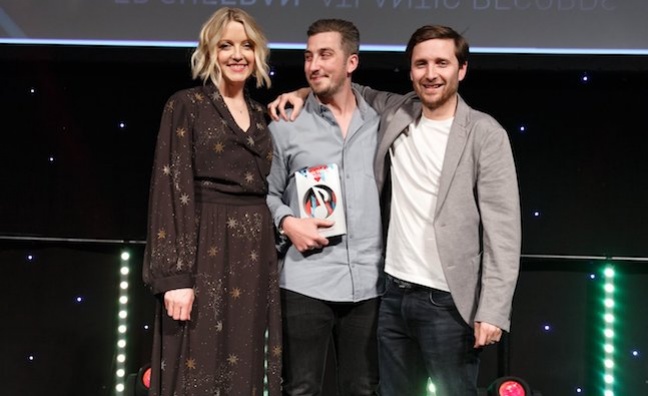 A coveted Music Week Award is a major achievement for anyone in the music industry. On Thursday (May 9) a host of top executives will battle it out in 23 categories that cover the entire music industry.

Picking up a gong at the Music Week Awards looks pretty impressive on the CV – and this year there’s the added bonus of a winning selfie with host Jo Whiley. Of course, the winners are already success stories in their own right. But a victory also signals that the triumphant execs and companies are quite clearly going places.

Here, we take a look at what happened next for some of the Music Week Awards class of 2018...

Ed seemed to do pretty well after this award went his way, though admittedly he’s won his fair share of trophies (despite those BRITs and Grammy snubs). More pertinently, though, the pair responsible for the ÷ campaign have since gone on to bigger things.

Before the year was out, Callum Caulfield (pictured, left, with host Lauren Laverne) was promoted from head of marketing to marketing director at Atlantic, with a brief to oversee the strategic development and execution of campaigns. A few months later, Nick Long (pictured, right) was upped from head of digital to the new position of director of audience. In 2018, the pair were also busy working on the massive Greatest Showman soundtrack, which is up for the Artist Marketing Campaign at this year’s ceremony.

With perfect timing, the grime star has launched his sophomore campaign with a big No.1 single just ahead of the Music Week Awards. Vossi Bop clocked up 12.7 million streams in its first week, the biggest tally for a rapper and ahead of Drake by almost 2m.

Polydor has been on a roll since their victory this time last year. The label secured the 2019 BRITs Critics’ Choice award for Sam Fender, as well as achieving big No.1s last year with BRIT-winning act The 1975, Eminem and Take That. Polydor is currently enjoying global success with Mabel. Plus, US artist Billie Eilish has been a star performer on the albums chart in 2019.

Polydor emerged triumphant in the Q3 market share figures for 2018, after chart success with Mamma Mia! Here We Go Again, A Star Is Born and Eminem’s Kamikaze. The label’s success attracted new recruit Ollie Hodge from Columbia. Along with label co-presidents Tom March and Ben Mortimer, he’ll be hoping to see the label retain its A&R title this week.

This hotly-contested trophy was collected by Guy Moot, then Sony/ATV’s UK MD and president, worldwide creative. As market leader, the publisher is again up for this award. But should they win, Moot won’t be collecting it.

The UK industry veteran’s rumoured move to head up Warner/Chappell globally was confirmed at the beginning of the year. Moot is now officially co-chair and CEO of Warner/Chappell, alongside Carianne Marshall. It’s a serious step up but he will still spend plenty of time in the UK, where Mike Smith heads up the British W/C business. Perhaps Moot’s already plotting a future awards victory for Warner/Chappell…

This was a big win for Warner Bros last year after fellow Warner label Atlantic had held the title for as long as anyone could remember. Airplay success for artists including Dua Lipa secured the victory for Jane Arthy, VP, radio.

Since that result, Arthy has joined the Roll Of Honour at the Music Week Women In Music Awards. Warner Bros has also seen an improvement in its market share of the Radiomonitor airplay Top 100, from 4.09% in 2017 to 5.74% in 2018. Atlantic, of course, still held the top spot. But who will win the Music Week Award this time?

Annie Mac’s become a mainstay of the BBC youth network with her evening Future Sounds show. As well as helping break new acts as a leading tastemaker, Mac’s Hottest Record In The World is one of the most coveted slots for radio pluggers. Mac will be aiming to retain her Music Week Award this week.

Since her win last year, Mac has also stepped up as a music industry champion on important subjects including diversity and emerging artists. “It’s still really, really unequal at the top levels, it’s embarrassing, the lack of women decision-makers at the top,” she told us recently. To help address the key issues, Mac’s AMP London event branched out with its first line-up of industry conference talks in March, supported by Music Week. And let’s not forget, since her 2018 win, Mac has also appeared on the cover of Music Week – another big accolade for anyone in the biz.

Find out all you need to know here about this year’s Music Week Awards at Battersea Evolution - and click here for the finalists..

Time is running out for tickets to the ceremony on Thursday (May 9) – click here for details on how to buy the last few remaining.