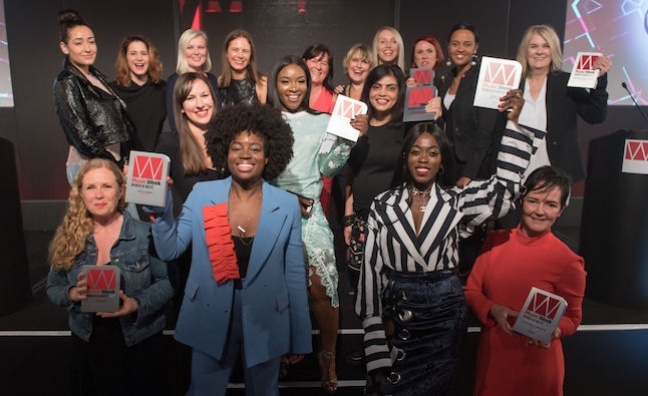 PRS For Music has signed up as an event sponsor of the Music Week Women In Music Awards. The completely sold-out, fifth edition of the star-studded ceremony that celebrates the achievements of female executives and artists takes place at The Brewery in Clerkenwell this Friday (November 9).

Speaking about their association with the awards, the collection society's director of membership, Claire Jarvis said: “It is great to be supporting the Women in Music Awards once again, championing some of the most inspiring and influential music creators and executives in the music business. This event brings together our members, colleagues and peers from across our industry – men and women alike – to celebrate diversity, as we recognise both how far we have come, and how much more there still is to do.”

Last year's ceremony saw artist Ray Blk, Decca president Rebecca Allen and former CEO of UK Music Jo Dipple among those who were honoured. You can expect an awards ceremony similarly bursting with impassioned speeches and major props from both UK and international execs this Friday.

All the regular Women In Music Awards categories are back this year, including Businesswoman Of The Year, Inspirational Artist, Campaigner, Rising Star, Music Champion, New Artist Award, International Woman Of The Year – won by Kobalt's Sas Metcalfe last time out  – and The Company Award. This year’s ceremony also includes a new category of Music Creative, to be awarded to a woman in the UK industry who has made a significant contribution to the making of music behind the scenes through songwriting, studio production or studio technology. The full list of categories can be viewed here.

As seen in the new edition of Music Week, the Roll Of Honour also returns, with seven of the 12 brilliant executives starring on our cover, having gathered together in London to celebrate their success. All 12 inductees are interviewed in an unmissable music biz package.

Event partners for the Music Week Women In Music Awards 2018 are AIM, UK Music and Worldwide Independent Network. Tickets are sold out.