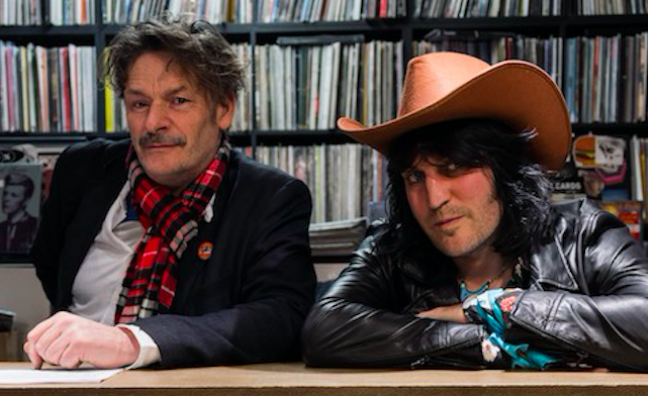 Record Store Day UK has today (April 9) confirmed its official ambassadors of 2019 as The Mighty Boosh.

The writers and stars of the acclaimed British comedy The Mighty Boosh are the first comedians to take on Record Store Day’s ambassador role. They follow in the footsteps of Sir Elton John, Run the Jewels, St Vincent, Pearl Jam and many more.

Speaking exclusively to Music Week, Noel Fielding said: “I feel like this is the purest thing we’ve ever done. One of the reasons we came together was because of music; we both liked Captain Beefheart and we both like Frank Zappa and we both realised we liked Gary Numan and there’s lots of references [in the Boosh] to the records we grew up with as kids. These are the first contact you have with art and with visuals. It’s magical when you see the records being pressed too. It’s amazing.”

As part of their role in the event, Julian and Noel are giving fans the special opportunity to get the complete Mighty Boosh radio series on vinyl. This is the first time the series appears on record and presents the surreal world of the Zooniverse on 3 pieces of coloured 180g vinyl.

In an official press release, Barratt explained why they chose Record Store Day as the time to release this record: “We are approaching singularity, when computers will overtake and replace us. Therefore, it suddenly felt prescient to outwit them and somehow save our precious early recordings onto a format that the dawning artificial intelligences will not see as a threat. In the feint hope that one day, thousands of years from now, when the human race is decimated and bereft, its ephemeral digital archive wiped by the powerful shockwaves of the ‘magneto-pulse’, a solitary humanoid survivor, scavenging and in the dark tunnels beneath the humming glistening exo-skin of the earth... will discover this disc abandoned in a cave, and trace its long fingernail across the patterned surface only to drop in shock as it hears my rich and resonant voice echoing through the cave”

Noel Fielding also added: “People that work in record shops are often obsessed with vinyl and music and bands and can steer you in the right direction and tell you about things that you would never know about. Whereas you can’t do that on the internet. It’s not possible. You want some vinyl expert to tell you about a record you’ve never heard of. That’s the beauty of it.”

Natasha Youngs, owner of the independent record shop, Resident Music said: “We are thrilled to have the untouchable Noel Fielding and Julian Barratt, aka The Mighty Boosh, as this year’s Record Store Day ambassadors. As a duo that have come up through grassroots venues, reliant on word of mouth and committed returning fans/customers, they understand the ethos of our establishments and the need to support independent businesses. They also handily really like music. And record shops. And buying music from record shops. So it’s all worked out really rather nicely. They even went and put out a record for the day. God bless them. A shamanic God obviously.”

The new issue of Music Week takes an in-depth look at the world of physical music. For our cover we speak to new HMV owner Doug Putman about the future of the high street retail giant. Elsewhere, we speak to Record Store Day co-ordinator Megan Page to get the lowdown on this year’s event, Frank Carter stresses the importance of indie record shops and small venues to artists, we take the pulse of the vinyl market and look at the growth of cassettes.