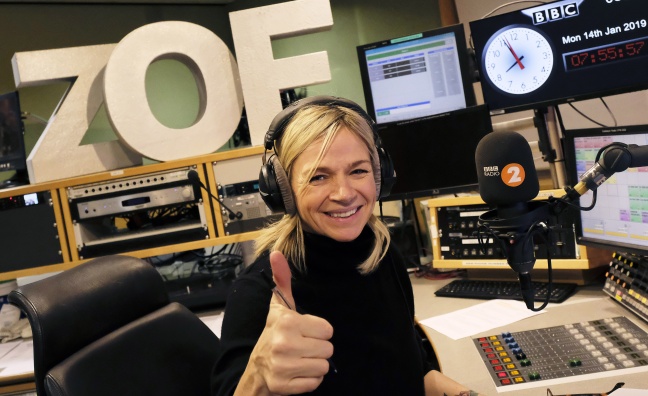 Radio industry watchers were awaiting a RAJAR body blow for Radio 2 in the latest set of ratings for Q1.

But as revealed in our quarterly analysis in the latest issue of Music Week, the network has continued to perform strongly despite the departure of Chris Evans to Virgin Radio.

After a difficult year with the exit of Evans and the short-lived Drivetime pairing of Jo Whiley and Simon Mayo, the network now seems stronger than ever. Here, Lewis Carnie, head of Radio 2, opens up about the RAJAR results, the new music policy and the outlook for the station and its new shows…

“For Zoe not to go down and to remain stable over the year has been an incredible achievement for her and the team. We’ve produced a great show that’s connecting with the audience, she’s very comfortable, she’s very at home and people are liking it. We’re absolutely delighted with what she’s done. To remain over 9m listeners and to be the biggest in the UK is phenomenal on her first outing. With every show there’s always churn when you make changes, and no one’s made as many changes as we have in their entire history – in 50 years we’ve never made so many changes at the same time.”

Do you think listeners are trying both shows at the moment?

“I think they are quite distinctive but there might be a bit of flipping back and forth, because Chris has done well too. But Zoe has made the show her own in a very short space of time, it’s an all new team around her. It’s got a different feel and pace to Chris, so she’s standing on her own really and connecting with the audience.

“We are just going to carry on hopefully delivering more of the same and she’ll develop as time goes on, there won’t be any forced change because obviously we feel that we’re hitting the right notes. What’s really thrilling for us, as well her amazing performance and how she’s held up these figures in the face of competition from other networks that we’ve never seen before, is [the performance of] our core presenters across the network. For Steve Wright after all this time to have a record reach in his afternoon show is phenomenal. I’m thrilled for him, because he’s such a hard-working presenter.”

Do you feel that this RAJAR result validates the station’s new music policy?

“I think it does. We’ve been very careful with the music, we have changed it, we are moving to appeal to a younger audience. But all the time we try and maintain the audience we’ve got, so we don’t desert anyone, we just try and include more people if we possibly can. I think that’s proved to be quite successful, so we’re thrilled with that too.”

“It’s marginally down, but for a new show it’s pretty much steady on the year so we’re very pleased with her performance. That show is a great listen, she’s settling in. Any new show has churn, it’s very minimal so we’re really delighted with what she’s doing as well.”

Radio 2’s listening hours were down with the share at 17.4% compared to 18.1% three months earlier. Is that a concern?

“The last quarter hours were very, very high, so they have gone down a bit. The competition will increase, I’m sure, as time goes on. It’s never been such a competitive marketplace, people are really making a lot of effort across the board, commercial radio is being aggressive at the moment, as they should be that’s their job. But I think that we’re very much holding our own, we’re very happy with our share, we’re very happy with the people we’ve got and they are delivering for us.”

To read the full Q1 RAJAR analysis pick up the latest issue of Music Week – or subscribers can click here. Click here for our report on the RAJAR performance of Jo Whiley and the presenter’s ambitions for her new show.