Six things to watch at the Music Week Awards 2019 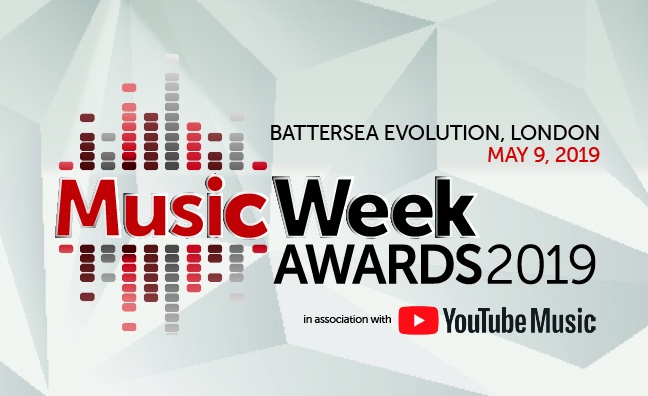 The Music Week Awards 2019 is almost upon us – it all happens at Battersea Evolution on Thursday (May 9). It’s a massive night for the biz that can make a big impact on an executive’s career.

A new host, venue and award category (Accountancy Firm Of The Year) in the same year – no one can accuse the MWAs of not shaking things up. Taking a night off from her BBC Radio 2 show, Jo Whiley will be presenting to a room of industry friends including fellow BBC presenters. Her former Evening Session wingman Steve Lamacq is in the running for the Radio Show category. Last year’s presenter Lauren Laverne ended up handing the Radio Station award to her colleagues at BBC Radio 6 Music. So Radio 2 will be hoping that Whiley brings them a bit of luck on the night.

Last year Spotify won the Music Retailer/Streaming Platform category. But 2019’s ceremony sees a refreshed approach with the category reinvented as Music Consumer Innovation. This year it is a microcosm of the streaming economy with nominees including Apple Music’s Beats 1 partnership with Jax Jones, Spotify Wrapped/Who We Be Live and Amazon Alexa – but would she be lost for words in the event of a victory?

Glastonbury won Festival Of The Year at the 2018 ceremony, but with the event’s fallow year the Eavis family are not in the running this time. So it’s set to be a fascinating battle between newcomers such as All Points East (whose inaugural line-up of LCD Soundsytem, Bjork and The xx was a big statement of intent), one-off special The Biggest Weekend, the Southbank Centre’s artsy indoor event Meltdown and old favourites including Reading & Leeds Festival, Download, Isle Of Wight Festival, Wireless and Tramlines.

Not a reference to last year’s comedy turn by Alex Hardee of Coda Agency, winner of the Live Music Agent (Individual) category – although similar larks will certainly be welcome on the night. By disruption, we’re thinking of those businesses challenging the usual practices. So it’s worth watching to see if any industry innovators, rapidly expanding operations or major new players – from AWAL, Kobalt and Concord to BMG, Twickets and YouTube Music – can make a big breakthrough on the night.

For some of the companies in the running, there’s potentially going to be a mixed mood in the HQ the morning after the ceremony. Last year saw Warner Bros Records take the Promotions Team crown from long-running champs and sister label Atlantic Records. Look out for such internal competition in the A&R Award, with Polydor competing with the fellow Universal team at Island, Syco Music up against Sony Music stable mate Columbia and Warner Bros Records duking it out with their publishing chums at Warner/Chappell.

Click here for a full list of this year’s nominees and here for everything you need to know about the awards.

For your last chance to get hold of a ticket, click here.