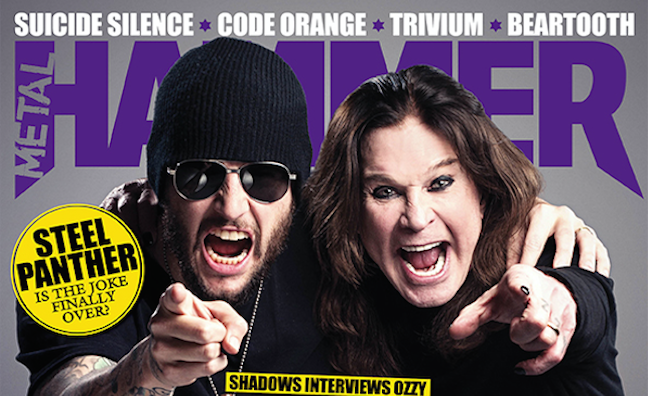 The print titles formerly owned by publishing company Team Rock have announced details of their new issues, with Metal Hammer’s due to hit shelves today (February 10).

Classic Rock and Prog Magazine, the other publications affected by the closure, will release their new issues in the coming weeks. The three titles were offered a lifeline last month when they were purchased by previous owner Future Publishing, whose music portfolio includes Guitarist and Rhythm magazines.

The new issue of Metal Hammer includes an exclusive interview with Ozzy Osbourne on the retirement of Black Sabbath, who recently completed their The End tour at Birmingham’s Genting Arena. The interview was conducted by Avenged Sevenfold frontman M Shadows.

Metal Hammer editor-in-chief Merlin Alderslade said: “When we were tasked with producing something special for our comeback issue, we knew we couldn't hold any punches. Having Ozzy Osbourne's final interview under the Black Sabbath moniker was epic enough, but when our good friend in Avenged Sevenfold's M Shadows accepted our invitation to conduct this one-in-a-lifetime chat, we knew we were making history. And, if the amazing support we have received over the past two months is anything to go by, I can promise you we're only just getting started. Thank you to everyone for the amazing love you've shown us during these insane few weeks. We hope this issue does you all justice.”

Along with Frank Turner, Machine Head and Rush, Avenged Sevenfold were among the artists to support a JustGiving campaign started by Ben Ward of Orange Goblin in support of the Team Rock titles. The campaign was also shared on social media by the likes of Queen and British comedian Bill Bailey and raised close to £90,000, all of which was donated to the staff of Team Rock.

The company was placed into administration on December 19 2016, with staff made redundant and going unpaid for December.

Team Rock was founded in 2012, and bought the Classic Rock, Prog Magazine and Metal Hammer titles from Future Publishing in 2013. At the time of closure, administrator FRP stated the company's website attracted more than three million hits per month, and the company owns an extensive archive of video, radio, images and magazines.