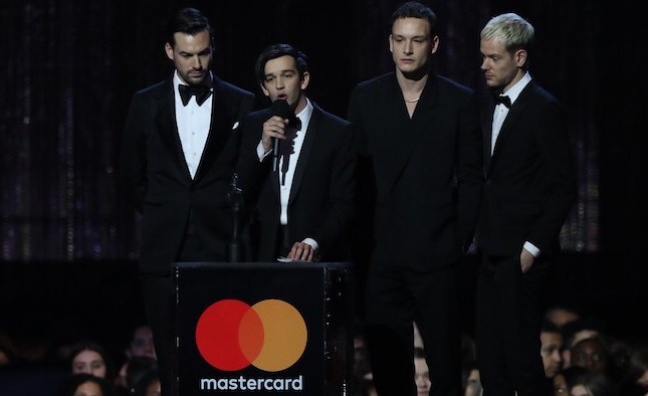 The ceremony was screened live on ITV and largely lived up to its “spectacular” billing by BPI and BRIT Awards chief executive Geoff Taylor.

In his second year as host, Jack Whitehall was the consummate entertainer with a barrage of saucy gags at the expense of nominees and guests including George Ezra, Shawn Mendes and Bros.

In his final year as BRITs chairman, Sony Music UK and Ireland CEO/chairman Jason Iley had a very good night - although not quite the triumph of 2017. In the 12 voted categories, Sony won seven BRITs including the shared award with Warner Music for British Single (One Kiss by Dua Lipa and Calvin Harris).

Universal Music labels picked up six awards, including wins for The 1975 – British Group and Mastercard British Album Of The Year for A Brief Inquiry Into Online Relationships. It has OCC sales to date of 97,568. The band’s label Dirty Hit partners with Polydor on the band’s releases. For the album prize, singer Matthew Healy thanked manager and label boss Jamie Oborne - "our fifth member".

Universal's win for The Carters (International Group) was shared with Sony.

Warner Music had to make do with that one shared award for Dua Lipa, though Ed Sheeran repeated his triumph last year in the special Global Success Award, which is not voted by the BRITs Academy.

Sony artist Pink collected the special award for Outstanding Contribution To Music, again not voted by the Academy. Sony Music claimed eight awards on the night, including Pink.

Healy gave the evening’s serious speech of the night addressing sexism in the music industry (quoting journalist Laura Snapes), though it was a running theme from other winners and guest presenters.

But otherwise this was a relentlessly fun-packed show of explosive performances, beginning with a high-octane Hugh Jackman with dozens of top-hatted dancers marching along during The Greatest Show.

Following his British Male triumph, George Ezra gave a breezy rendition of Shotgun with a brass band. There were also standout performances by Little Mix, Jorja Smith, The 1975, Jess Glynne & HER and Pink.

Calvin Harris was previously nominated 14 times at the BRITs without converting any into victories. This time he won one of the BRITs he was nominated for (British Single) and also took the British Producer Of The Year award, decided on record sales and by a judging panel.

“It means a lot,” said Harris, who noted his attendance over the years without a single victory.

The centrepiece of the BRITs show was a supergroup of hitmaker Harris with Dua Lipa, Rag‘N’ Bone Man and Sam Smith.

In reality it was the One Kiss segment, featuring Dua Lipa and silver-clad dancers in foliage, that had the fans screaming down the front. The biggest single of 2018, it’s racked up sales of 1,672,101.

“I bet Calvin’s exhausted after that – go and lie down mate,” quipped Whitehall, just for anyone in the room who has no time for superstar DJs.

The surprise winner of the night was Tom Walker, who appeared visibly shocked to have beaten artists including Ella Mai, Idles, Mabel and Jorja Smith.

“Yes, Gran, here we are,” said the Scot, who was named Music Week Sync Artist Of The Year in 2018. His signature hit, Leave A Light On, has sales to date of 857,034, according to the Official Charts Company.

Jorja Smith was a popular winner for the British Female BRIT. Her debut Lost & Found has sales to date of 70,797, according to the Official Charts Company.

The BRITs has apparently given up on trying to attract the superstar international category contenders. Whitehall joked about their non-attendance ahead of a pre-packaged video of filmed acceptance speeches from The Carters (International Group), Drake (International Male) and Ariana Grande (International Female).

“Don’t give it to Drake, he never turns up,” said Whitehall. “Give it to Shawn Mendes, he bunked off for school for this.”

Whitehall at least seems likely to be invited back in 2020.

The 1975 – A Brief Inquiry Into Online Relationships

British Producer Of The Year