'The fans will be delighted': Francis Whately on the final film in his Bowie trilogy 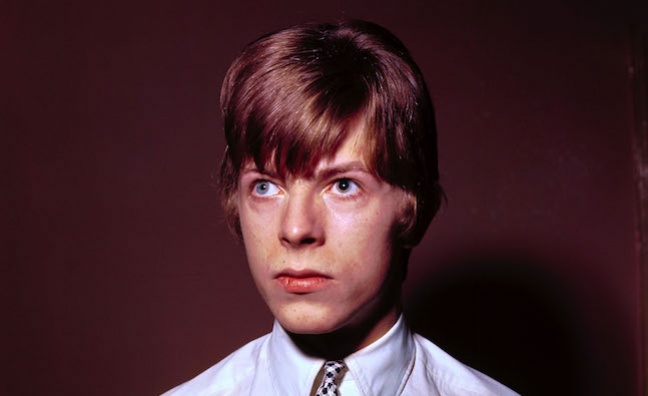 Francis Whately’s final feature-length documentary on David Bowie airs on BBC Two on Saturday (February 9). Directed and produced by Whately, it begins in 1966 at the point when David Jones changed his name to David Bowie. It was commissioned by Jan Younghusband for BBC Music.

The documentary coincides with a period of busy catalogue activity and strong sales for David Bowie following his final albums The Next Day (2013) and Blackstar (2016), which was released shortly before his death. Here, Whately takes Music Week inside the film-making process for his revealing account of Ziggy Stardust’s formative years…

This is your third and final Bowie documentary. Has he taken over your life in recent years?

“I’ve done other films but yes, he has in a way taken over my life. I dreamt of him last night. But as I’ve always said, it’s a bit of a busman’s holiday because I was a fan when I was young, he was the first person I ever made a film with, a two-minute film for Newsnight. So it’s not too shoddy a job to make three 90-minutes films about your hero. I think I’m going to miss it.”

How aware and involved was Bowie with the film series when it launched with Five Years in 2013?

“He knew what was going on behind the scenes. We were in touch but not really about the film, strangely. He left that for me to do. Then nearly at the end he said, ‘Francis, can I have a copy of the film’ before it went out. I said, ‘Absolutely not’. He sent back ‘LOL’. But I told him what I would do was get a copy to be delivered to his apartment in New York, so that he could watch it simultaneously when it went out first on BBC Two. He said, ‘Deal’. Then the moment it finished he sent me an email saying, ‘I’m very proud of you, Francis’, which was a very nice thing.”

So how ‘official’ are these Bowie documentaries?

“He never, ever wanted an authorised film made about him. He made that very clear. So, in a biographical sense I’ve made three films that will get closest to that. Whether that will change one day, who knows? The family and the estate trust what I’m doing. It’s as close to being authorised without being authorised that you can get.”

We know from the V&A exhibition that there is a lot of archive material. How much were you able to access from the early days?

“Quite a lot of demos, quite a lot of photos that have never been seen, quite a lot of archival material. Unfortunately, there were something like eight [TV] performances from around Europe in the ’60s and they were all wiped, whether it was Belgian, Dutch, German or British TV. All broadcasters did it at that time. However, we have got some treats in store. We’ve got things that have never been seen before in terms of archive – some broadcast things and some sort of live footage. The fans will be delighted. I think I have fulfilled the fans’ desire for new material, although more importantly for me is just to tell a good story about a fascinating period in his life.”

How much of this film is a study in failure?

“That’s a good question - 90%. This film should be shown to every child in the country after their A-levels to say, ‘If you want to progress look at how this man did it, because he never gave up’. He just carried on and every time he was kicked down, he just got up and decided to learn something from it and move on. It’s a remarkable story of persistence.”

“Absolutely, one of the last interviews he gave was a radio programme for the BBC with a jazz broadcaster [Courtney Pine in 2005], talking about Stan Kenton and all his jazz heroes from the past. Jazz came up again and again; it really emerged on Aladdin Sane and Blackstar. Yes, with his early influences, nothing was not used. Everything had its place, whether it was Little Richard or Stan Kenton. They all came out in some guise at some stage in his very long career.”

Space Oddity was a hit but it seemed to be false start. How much of a breakthrough was it for Bowie?

“What I think is interesting is that Tony Visconti, who was already producing most of his music, he said, ‘I’m sorry David, but I’m not going to produce this – it’s a novelty hit, I don’t like it very much, it’s not going to go anywhere and you’re never going to be able to repeat it’. So he gave it to his friend Gus Dudgeon, who had worked with David on The Laughing Gnome. Gus did a fantastic job, but it did remain a novelty hit. Although in some ways he revived the theme of space for Starman, Ziggy Stardust and Hallo Spaceboy, in terms of a song it was something you couldn’t really follow up. But I think what it did do, it gave David a taste for fame. He always believed he would be famous, everyone around him also knew that he was special – although they couldn’t find the right vehicle. Space Oddity gave him that taste for fame and I don’t think he ever looked back after that point. All the people that knew him at that time said he would walk into a bar as a famous person. I think Space Oddity did change him and it is very much a turning point.”

How much was he self-managing early on?

“I think he’s always self-managed to some degree. He had a manager called Ralph Horton, then he had Ken Pitt, then Tony Defries. Ken Pitt saw him as an all-round entertainer, David quite liked the idea but he wasn’t just that. I suppose no manager was going to be able to deal successfully with him because he changed so much. He was such a maverick and no one could quite contain him. Famously, after Young Americans the label said, ‘Can we have Young Americans 2’? [But] then he produced Station To Station and then Low. He was never going to do what anyone wanted, so I don’t think any manager could have kept up with him. But Ken Pitt, of all of them, was very good to him, supported him and believed in him. But then a lot of people believed in him.”

How hard was it to get associates of Bowie from the ‘60s to speak on camera?

“I’ve always had a fair wind behind me. On the first film, I know for a fact that all the people I approached – whether it was Carlos Alomar or Earl Slick – they all checked with David that I was okay. Once I’d got that okay for the first film, for the second film it was much, much easier. For this third film, it’s been a breeze. People were delighted to be talking about a time that they remembered very fondly and hasn’t really been spoken about. There are the obvious ones like Lindsay Kemp, and we got the last interview with him just 10 days before he died. He was in good form. We’ve also got Del [Roll] and Butch [Davis], who were in a band with him called The Riot Squad, which most people won’t know anything about. We’ve got Ray Stevenson, who took photographs and famously said, ‘I only shot David in black & white because why would I waste colour on someone who wasn’t going anywhere?’”

Were there any challenges in securing music rights for the documentary?

“It’s a really difficult process and it’s getting much harder. The worldwide version will be slightly different, because some rights we just can’t clear or are prohibitively expensive now to clear for America. The rights issue is a nightmare, it’s going to mean that making these sorts of films will be very difficult unless you have the estate on board. They [the Bowie estate] have been very cooperative.”

Which rights areas are difficult?

“Publishing, recordings, all of it. David did a rather beautiful recording of I’m Waiting For The Man by The Velvet Underground. Although we can use it in the UK version, it is expensive to use it elsewhere. There is a lovely story about David’s misunderstanding of what the song I’m Waiting For The Man is about. He believed it was a homosexual song rather a song about finding drugs.”

Do you have a favourite Bowie era?

“When I was young, I loved the Space Oddity album – there isn’t a duff song. I personally think that actually, at heart, David was a folkie and the Space Oddity album is as close to the real David as you’ll ever get. He became a rock giant and all the rest of it afterwards, but I think at heart he was a man with an acoustic guitar.”

Is there any potential for a cinema release?

“I would love to make a cinematic film of all three, a proper film of 15 Years, which might be further down the line for a cinema release. Because the first film can never be shown again, it’s run out of rights. It will never be on TV or DVD.”