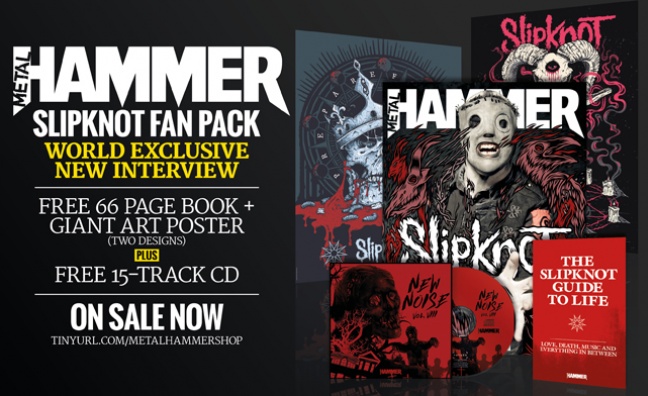 The title – which relaunched last February following Future's acquisition of the Team Rock roster – has been given brand new regulars, a new-look reviews section and will bring back exclusive gifts and collectable covers every month. The first cover story is a world exclusive interview with Slipknot. Other bands featured include Avenged Sevenfold, Tom Morello, The Dillinger Escape Plan, Babymetal and Amon Amarth.

Speaking about the new-look issue, Hammer editor Merlin Alderslade said: "Metal Hammer has evolved once more, and we're delighted for everyone to see what we've been working on. The music industry is changing, and the fact is that readers demand more exclusivity in their mags, and more bang for their buck. So, we've reimagined Metal Hammer to reflect what we feel our followers want more of - bigger and better stories, a better breed of writing, high-class design and exclusive extras that you won't get anywhere else. This month, that means a free album full of brand new bands, exclusive art posters and a Slipknot book! Where else do you get all that in a rock mag in 2018?"

Alderslade has also suggested that the redesign is but the first stage in wider plans for the brand going forward.

"We're just getting started," he added. "Metal Hammer is a brand that's ever-expanding, and we'll have some new platforms to show you in the coming months. Watch this space."

Future reacquired the Team Rock roster of magazines, including Metal Hammer, Classic Rock and its Prog brands, less than a month after administrators were called in in 2016. The acquisition encompassed the magazines, domain names, events, radio license and websites of Classic Rock, Metal Hammer, Prog, Blues and the Golden Gods for £800,000 from FRP Advisory, the administrators of Team Rock Limited. A huge fundraising campaign for affected staff was set up at the time by Orange Goblin frontman Ben Ward, raising more than £52,000 for employees in less than 36 hours.

Speaking to Music Week late last year, Alderslade said: "In December we were told that Metal Hammer may never exist again," added Alderslade. "What happened in the weeks and months after didn't just show the power and strength of our scene when we come together, but showed the world that Metal Hammer is a central part of our community and can still make amazing things happen like no other magazine can. We were blown away by the amazing support everyone showed us."

The new-look issue is available in stores now.