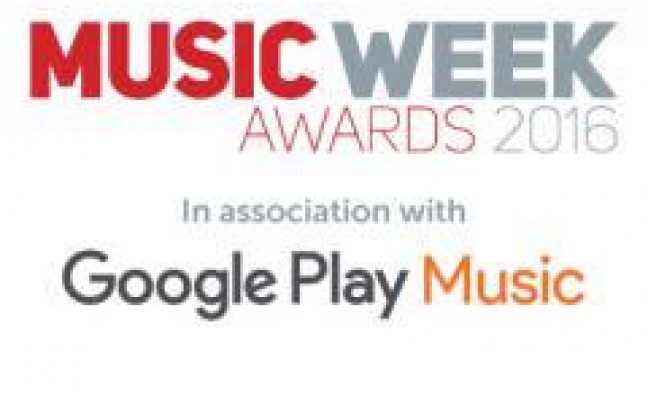 The Music Week Awards 2016 in association with Google Play Music were the music industry’s biggest night out of the year.

Now, the winners have picked up their gongs and the hangovers have subsided, Music Week takes a look back at just a few of the highlights of the night… Enjoy!

The Strat presentation is always moving, but this one had a bit of everything. There was stardust: Chris Rea presented the award alongside Universal’s Andrew Kronfeld and Sting, Rolando Villazón and Chinese superstar Sa Dingding all appeared in the video. There was hardcore industry nous – the tribute video featured the most heavyweight exec cast you’re likely to see, from Lucian Grainge and David Joseph to Doug Morris, Jason Iley, Irving Azoff and many, many more. And there was emotion – when Hole spoke about his encephalitis, which caused him to step down from Universal last year, and declared: “I’m getting a bit better”, cheers and tears abounded.

The Manager Of The Year category was so hotly contested that, in truth, any of the seven finalists would have been extremely worthy winners. So, when Closer Artists’ Paul McDonald and Ryan Lofthouse were announced, there was only one thing for Lofthouse to do: reference the Arctic Monkeys at the Mercury Prize and declare: “Someone call 999, [Adele manager] Jonny Dickins has been robbed.” Even better, he followed up by quipping: “He’s not here? Fuck it then, we deserve it…”

Lofthouse wasn’t the only one to point out that, at the Music Week Awards, everyone’s a winner, really. Live agent winner Jon Ollier pointed out that: “No one makes it in this industry alone.” And when Banquet Records in Kingston scooped Independent Retailer, they noted they weren’t actually in competition with other indie shops: “Record Store Day has shown how much stronger we are when we’re together.” HMV’s Melanie Armstrong, meanwhile, a Liverpool fan, took her show of unity beyond the business with a heartfelt: “Justice for the ’96!”

4. THE HOST WITH THE MOST

Paul Chowdhry might have announced himself as “the best comedian in this price range” but he earned whatever fee we managed to scrape together with an edgy but hilarious display. We’re still not sure whether his repeated rechristening of publishing winners Sony/ATV was a metagag or not but that one about Spotify and Jay-Z was a doozy. Respect.

5. AT SEVENS AND EIGHTS

Atlantic Records’ domination of the Promotions Team award continued. “For the seventh time in a row…” announced Chowdhry. “It’s eight times, actually,” responded Atlantic’s ever-ebullient Damian Christian before leaving us with his trademark: “We come in peace, we’ll leave you in pieces.” Just like the Music Week Awards, in fact…

See the next issue of Music Week for more on the awards, plus a career-spanning interview with Max Hole. Subscribe here.