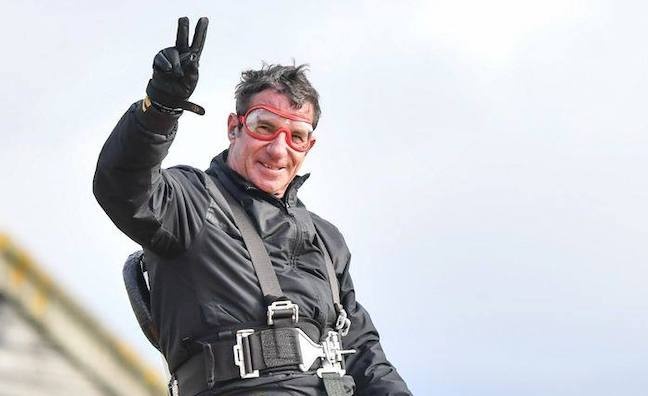 Dub Pistols frontman Barry Ashworth blew a fortune from his Geffen deal on drugs in the noughties and was once named Caner Of The Year by Muzik Magazine.

Ahead of his third fund-raising wing walk, he discusses his recovery, as well as the music industry’s issues with mental health, addiction and suicide...

Music has always had a long history with performers and crews suffering from mental health issues, either through drink and drug abuse, performance anxiety or the constant pressure to be the best.

The strains of touring and exhaustion are another massive factor in this. So many artists suffer from mental health issues with the highs and the lows, the touring and the late nights and generally the lifestyle. I witnessed it first hand.

Suicide is another massive problem in our industry, certainly after Keith Flint’s passing and during Covid. It has been the isolation and not knowing what the future really holds. It really hit home to me that if I can be affected, then many people can be affected badly too.

I started working at clubs in my early twenties, putting on various different nights. It was stressful - one day you have loads of money and all it takes is one bad night and you’ve lost everything. There was drink, drugs and late nights. The anxiety, paranoia and the comedown puts you in a head space of negativity and leaves you really vulnerable.

I lost a few friends. There was addiction in my family and someone close to us actually overdosed and died on the sofa in our company one night. I once got awarded Caner Of The Year from Muzik Magazine, but I didn’t want to take it because I didn’t want to be responsible for even one person starting to take drugs. What I chose to do with my own life was my decision. I knew the effect it had on me and the damage it had on others.

My relationship with drugs cost me dearly. It was the cause of me blowing the money from my seven-figure Geffen Records deal. It was 2001, our Dub Pistols record was in the US charts and everything started to implode. Our record Six Million Ways To Live got cancelled, the tour got pulled and we lost everything. We arrived back in the UK broken, we couldn’t get another deal, we had no money and were addicted to drink and drugs.

A lot of people who I thought were my friends stopped calling. It was a huge wake-up call. A friend had a word and said, ‘Barry, you need some help’, I managed to turn things around in two years.

The arts and hospitality industry had a horrendous year financially, being the first into lockdown and being in lockdown the longest. This has had a massive effect on many artists and crews mentally, who have had their livelihoods taken away but also their identity.

Over this past year, I have spoken to artists and you can hear the desperation in their voices

Over this past year, I have spoken to artists and you can hear the desperation in their voices, the anxiety and the stress levels. So many people live on a knife-edge with their finances and they have lost their livelihoods. There weren’t many people whose mental health wasn’t affected. Many people don’t know what the future holds for them, and of course that’s going to have a psychological effect on you. People lost their sense of worth and it broke them.

Someone close to me committed suicide, and these stories kept coming through, like it was happening every day with someone taking their own life. I was calling people every day to check on them, and a lot of them couldn’t talk to me as they were in such a dark place. I went into myself last year too, and I found for the first time ever I was feeling paralysed and numb in my mind.

People always say you should reach out and let people know. The problem is that when you go into that state, you can’t actually speak; you don’t want to speak, you withdraw and it’s very hard to pull yourself out of it.

Everybody needs to feel good, but you can’t always feel good. For every up there is a down; some people’s downs are way further than others. You’ve just got to be able to look out and look after each other.

I got involved with Tonic Music around eight years ago. I met with the Tonic founder Steph Langan and we talked about helping people recover through music and the way it can lift you up. I heard about their workshops, helped with fundraising and when they asked me to be a patron, I jumped at the chance.

When people go silent that’s when you need to start worrying about them. So the Tonic Rider programme launching in the lockdown really made a difference. I use the Tonic programme to give me a focus, keep me busy and help me feel like I’m doing something good. Over the years I’ve done skydives, charity concerts, streamed gigs and run auctions.

I wanted to do something that I hadn’t done before, I’m a bit of a thrill-seeker, so when I decided to do a wing walk two years ago, it was just me. That went really well and I thought it would be great to make it into an annual event, invite some of my industry mates and see if we can raise even more money, so we decided to form the Flying Circus and pulled it off.

This year will be the third annual Barry’s Flying Circus, my big charity wingwalk. I will be joined by my mate Bez, alongside 40 wing walkers, on September 28 and 29 and between us we aim to raise £80,000!

Doing the Tonic Rider Peer Groups, facilitated by musician and psychotherapist Adam Ficek, has been an eye-opener. We have been going on a journey with people who are optimistic one week, breaking down the next. At this moment in time, the whole mental health issue is massive and it’s not going away, even now that events are starting to return to normal.

Our fundraising with the wing walk will allow the Tonic Rider programme to continue to provide free, direct, mental health support to music industry professionals, through peer support groups, mental health first aid training and music performance anxiety workshops, among other services, along with online resources and support at venues this year and beyond.

We are still on a road to recovery, but the issue now is funding. With the cost of Covid and Brexit, there is a massive gap at a time when it’s needed now more than ever. But it’s amazing how generous people are - it’s been overwhelming and heartwarming to get that support from people.

We hope people will do what they can and give what they can however small. And if they need help, then the Tonic Music For Mental Health charity is here for them.

Click here for help and advice from Tonic Music.