Can the spirit of V Festival Rize from the ashes? 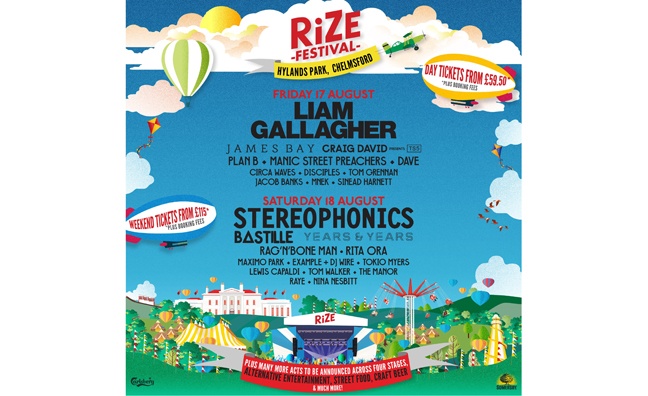 The line-up for the first Rize Festival can be summed up in a Radiohead lyric: no alarms and no surprises.

Topped by headliners Liam Gallagher and Stereophonics, it’s a bill that harks back to the glory days of the Chelmsford site’s previous tenant, V Festival, when indie music ruled the world (or at least the UK). Set for August 17-18, Rize offers a cheaper ticket price than its predecessor - £59.50 for a day ticket and £160 for weekend camping (compared to £89 and £189, respectively, for V’s swansong).

Festival Republic, which ran V in partnership with SJM, Metropolis and MCD, said the event would continue at both sites under a different guise following Virgin’s withdrawal as headline sponsor. However, claims that its Staffordshire leg would not take place this year - first reported by Music Week last September - have proved accurate. Plans to expand from two to three days have also failed to materialise.

Nevertheless, 2018 promises to be the most intriguing year for the UK's major festivals in some time. The absence of Glastonbury is something of a red herring; the biggest festival of them all effectively exists in a vacuum. The real difference maker is AEG Presents’ new baby, All Points East. Not only has the promoting giant’s takeover of Victoria Park caused Citadel, Lovebox and Field Day to find new homes, it has upped the stakes in the battle for exclusive deals with top talent, leaving many of its rivals thin on the ground.

What All Points East provides is an exquisitely crafted bill aimed at a specific type of music fan. Elsewhere, the emergence of successful multi-genre events, such as Manchester's Parklife (also starring the younger Gallagher, incidentally) also point to a new way forward, while boutique events up and down the land are brimming with unique selling points.

In comparison, Rize feels unimaginative - an exercise in the tried and tested, rather than an exciting new dawn.

At the heart of V’s downfall (and lest we forget, it was enormously successful for its first 15 years) was a failure to move with the times. Its successor must be careful not to make the same mistake.