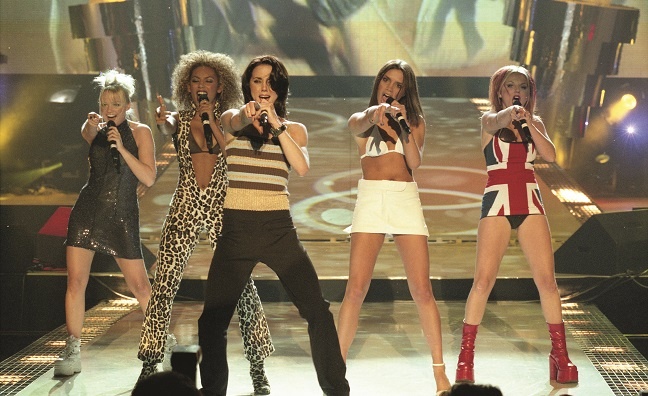 The two questions I’m always asked, when I tell people I’ve attended every BRITs are: ‘How much have they changed?’ and ‘What’s your favourite moment?’

Well, one thing that hasn’t changed, as confirmed by watching last week’s fabulous The BRITs At 40 documentary, is the pleasure artists get on being nominated – let alone winning! Association with the show is still a landmark moment in any artist’s career, and despite the current chatter around the relevance of awards shows generally, the BRITs are still hugely important.

Hence, I have been to every show. I also came up with the name! Technically speaking, they haven’t always been the BRIT Awards but a new name was required for the 1989 show. At the time my boss, Sony Music chairman and CEO Paul Russell, was BRIT Awards chair and, as is a CEO’s prerogative, had me on the committee to do all the jobs for which he didn’t have either the time and/or inclination!

Various names were put forward (I recall the BRIANs being one) but I championed my case for BRITs. It worked as an acronym, was/is part of the language with a hint of jingoism, and had a convenient, snappy catch-all monicker! Paul liked it, liked my logic and, as Brian Southall recorded in his 2005 history of the Awards, “Told anyone who challenged it, ‘to fuck off, Morrish’s name is the one’.”

So I claim my place in BRIT Awards folkore. Talking of which – folklore moments, however small, great, ‘good’ or ‘bad’ have now ensured the show has passed into the country’s cultural psyche.

Some, amongst many and in no order, include Geri Halliwell’s dress (how brilliantly BRITs!); The KLF machine-gunning the crowd; Kenneth Baker MP getting booed and Cliff Richard apologising for us all; Adele’s speech getting cut short; Mick Fleetwood and Samantha Fox’s notorious stint as presenters. But you could pick any number of others – John Prescott’s dust-up with Chumbawumba; Oasis and Blur; Maurice “Obie” Oberstein and his dogs and, of course, Michael Jackson and Jarvis Cocker.

And in that sense it is a sort of microcosm of our wonderful business that is, by definition, one of extremes. We won’t always get it right but there is artistic style and commercial determination. We have a creative, maverick professionalism, a polite boorishness that nonetheless has an open heart with good intentions (never forget the show is a charity show for which the BRIT School, Nordoff Robbins and countless small charities are eternally grateful). There is a sui generis logic in our business DNA and all of this, and more, makes us successful – our economic contribution to UK PLC has grown 48% since 2012. Take note, politicians – and the BRITs provide an important window on that success.

My personal memories include Simon & Garfunkel (allegedly not on speaking terms, but having to re-record Old Friends at the debut 1977 show because ITV hadn’t got a clean sound-recording) but also other truly wonderful performances: David Bowie, Fleetwood Mac, Eurythmics, Dusty Springfield and the Pet Shop Boys, Peter Gabriel, Paul McCartney, Amy Winehouse and Stormzy to name a few.

Not forgetting Adele’s blindingly gorgeous delivery of Someone Like You in 2011. And, while not a musical moment, Prince having his bodyguard ‘protect’ him as he went to the stage to collect his awards in 1985 (the first time they were on television) was pure showbiz!

It is always a privilege, and joy, to know and work with artists who win and so I include, amongst many, Sade, Bros, Terence Trent D’Arby, Paul Young, Alison Moyet, The Bangles, Manic Street Preachers and cannot overlook both Wham! and, later, George Michael who, in 1991, so movingly dedicated his Best Album award to CBS/Epic legend, and my/his very close friend Ronnie Fischer, who had just died. Finally Michael Jackson, with whom I worked for over 25 years, and whose seven awards culminated in his performance of Earth Song in 1996, his Artist Of A Generation Award – and that Jarvis Cocker intervention.

The BRITs has had two terrestrial broadcasters, two sponsors (huge thanks to Mastercard for over 22 years’ support), been at 10 venues with 31 different hosts, 15 chairmen, 15 award designs and most importantly featured 295 performances from 256 different acts/artists. Without whom so much wouldn’t have been possible – 10,000 students going through the BRIT School (alumni have now won 12 awards); countless people, young and old, benefitting from Nordoff Robbins therapy; and, well, much of our business – ‘the industry of human happiness’.

Of course The BRITs still matter.