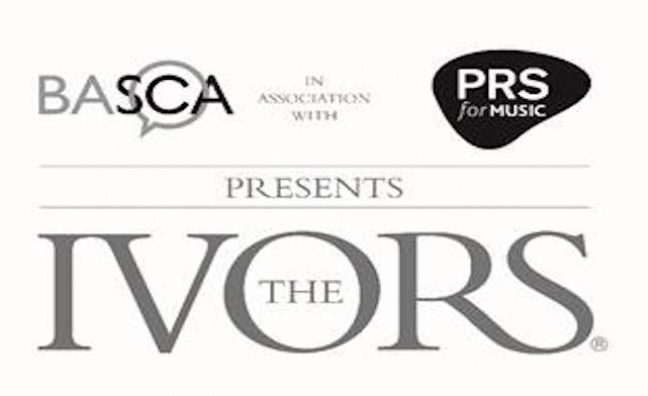 The 63rd edition of the Ivor Novello Awards has been staged in London with a line-up of big winners and star guests. Here’s Music Week’s round-up of the most memorable moments from the awards ceremony…

Friendly rivalry seems to define the relationship between Ed Sheeran and Stormzy, who are now label mates at Atlantic. While the grime star won in key categories at the BRITs in February, Sheeran bagged two awards at the Ivors – the PRS For Music Most Performed Work (Shape Of You, co-written with Steve Mac and Johnny McDaid) and Songwriter Of The Year. “This is my favourite awards show, it’s the one that definitely means the most to me,” said Sheeran.

“The Ivor Novello is obviously an award that only recognises your pen and your art, so I proper wanted to win this one – yes!” said Stormzy when he won the Album Award for Gang Signs & Prayer. And he’s ready for more competition with Sheeran.

“My brother, Ed Sheeran – that’s my benchmark,” said the grime star. “Every song I write, I say ‘Would Ed do this?’. I’m always trying to beat him, he got Songwriter Of The Year – I’m coming for you next year!”

The Ivors was packed with icons of songwriting and composition, from a tearful Billy Ocean collecting an award for International Achievement (“The reason I’m crying? When I look at the screen and see how young I was!”) and 90-year-old composer Thea Musgrave (who gave a bravura speech on “the power of classical music”) to award presenter Eric Clapton claiming to be a fan of Stormzy, the irrepressible Billy Bragg and a fragile but always entertaining Shane MacGowan.

The last award of the ceremony (PRS For Music Special International Award) went to Lionel Richie, whose speech was almost as popular as his 2015 Glastonbury set. “In a songwriter’s life, there are moments when you are actually humbled by the presence of who’s around you,” he said. “Being in a room full of songwriters dedicated to songwriting – this is the top of the food chain, this is the rare air.”

As it was a big day for Ed Sheeran, Richie also honoured the man of the moment with a succinct statement that summed up the ÷ campaign. “Ed, you are absolutely kicking ass, my friend,” he said.

There were some good ones to choose from but Guy Garvey of Elbow’s acceptance speech for Best Song Musically & Lyrically for Magnificent (She Says) was one of the standouts.

“Mel, we used to have a poster of you in our flat,” said Garvey as he collected the award from Mel C. Admitting to being a “bit sloshed”, he said he was “honoured” to be in Elbow and said the Ivor “really does mean the world”.

He also revealed the inspiration for the song on his honeymoon. “We made a baby on that honeymoon – first try,” said Garvey. “Just saying.”

She writes the songs…

In the latest issue of Music Week, we celebrate US hitmaker Diane Warren. Perhaps her UK equivalent is Cathy Dennis, who gave an emotional speech as she received the Ivor for Outstanding Song Collection (co-writes include such huge hits as Kylie’s Can’t Get You Out Of My Head, Britney Spears’ Toxic and Katy Perry’s I Kissed A Girl).

“Thirty years has gone so quickly, there are so many people who have played a role in my journey,” she said. “I’ve only had one manager, Simon Fuller, he’s amazing – he believed in me when I was 17.”

There was also praise for Concord (“Thank you for making me believe in myself again”) and Dennis echoed Dua Lipa’s BRITs speech a few months ago. “I really hope that I can inspire other women,” she said.

Producer and songwriter Fraser T Smith is used to getting recognition from Stormzy – but this time he was sharing the limelight with rising rap star Dave. The pair took to the stage after winning Best Contemporary Song for Question Time.

“Fraser is the most talented musician I’ve ever had the pleasure of working with,” said Dave. “He’s a world-class producer – Fraser took a big, big chance with me.”

BASCA chairman Crispin Hunt had the tough job of opening the show but he pulled off a winning combination of acerbic wit and insight into the evolving music industry.

“Are we all feeling pretty good today?” he asked. “So we bloody well should be. Not only because we’re sitting in a room full of creative geniuses – songwriters, composers, producers, performers… accountants. But also because the public have actually started paying for music again. Thank fuck for that.

“For the first time in a generation, music revenues are actually growing again. But we’ve got £9.99 streaming to thank for that.”

While welcoming the return to growth, Hunt argued that “we can’t carry on using the past as a model for the future” as he called for an industry based on “accuracy, trust, transparency and partnership”.

“I’ve seen at least 10 of my own personal gods in the room,” he added. “We all know who they are – people who’ve opened doors inside us that we never even knew existed.”

You can read the full list of Ivor winners here.