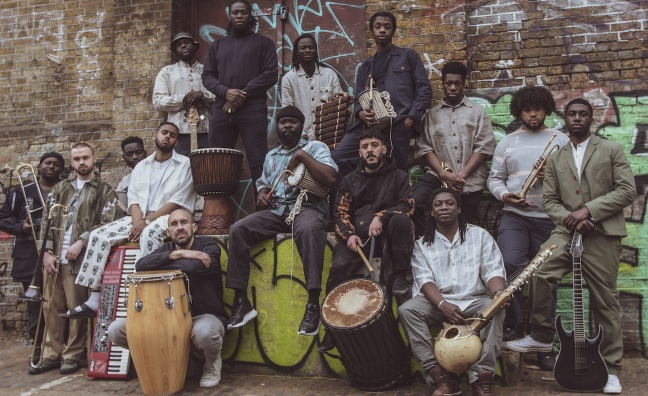 Balimaya Project was formed in 2019 by percussionist Camara-Onono, who was inspired to bridge the gap between West Africa and the diaspora.

Balimaya’s debut album Wolo So was released in 2021, with the collective having featured on radio, playlists and editorial all over the world. They have been supported by Giles Peterson, who called their album “one of the most important releases this year” on his BBC 6 Music radio show.

The band has played the main stage at festivals across the UK, including We Out Here!, Brainchild Fest and End Of The Road. Recent live highlights include a performance at Womad Festival and a sold-out headline show at the Barbican’s Milton Court in 2021, as well as performances at the Southbank Centre and Super-Sonic Jazz Festival in Amsterdam in 2022.

Balimaya were nominated for Songlines Magazine’s Album of the Year in the Africa and Middle East category, as well as being named one of the Top 10 global music albums of the year by the Guardian. They recently released their latest single, Season Of Baraka, which has seen support from BBC 6 Music.

The band have a new album set for release in 2023 and will be in Dakar, Senegal, and Abu Dhabi, UAE, ahead of SXSW.

Bucks’ director A&R Sarah Liversedge Platz said: “Yahael Camara-Onono is a really exciting musician and songwriter. He’s incredibly talented and his star is rising with the work he’s producing with Balimaya Project. We’re really happy to welcome him to Bucks.”

Yahael Camara-Onono said: “Ever since coming into contact with Sarah at Bucks I’ve been impressed at how Bucks always fight for the artist and the great results they bring to the table. I’m honoured to be part of and represented by the Bucks family. Looking forward to a long and fruitful relationship.”