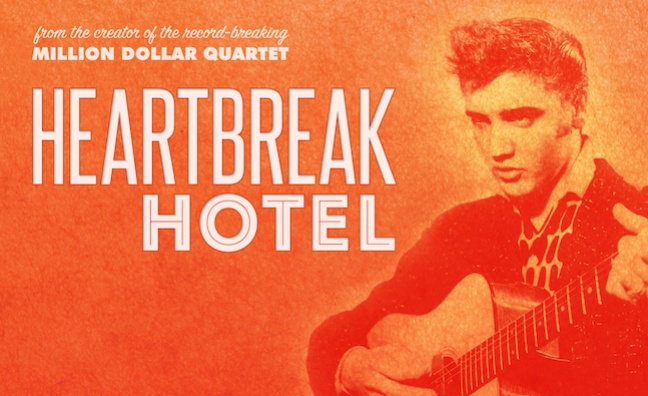 Sony/ATV Music Publishing has signed up as co-producer and investor of a new Elvis Presley stage musical, Heartbreak Hotel.

A prequel to the Tony Award-winning Million Dollar Quartet, the show focuses on the early life of Presley.

The new musical is written and directed by Million Dollar Quartet co-creator Floyd Mutrux and is a partnership between Heartbreak King Productions and Authentic Brands Group, owner of Elvis Presley Enterprises LLC. It will have its premiere at the Broadway Playhouse in Chicago on Sunday, July 15.

Sony/ATV has agreed to license more than a dozen songs recorded by Presley, including Hound Dog, Jailhouse Rock, Mystery Train, Lawdy Miss Clawd, Rip It Up and Heartbreak Hotel.

Sony/ATV Music Publishing chairman and CEO Martin Bandier said: “Elvis Presley is the ultimate music icon who not only totally transformed music but changed the world. I am proud that Sony/ATV is now involved as a co-producer and investor of Heartbreak Hotel, which will not only serve as a fantastic reminder to everyone like me who grew up with Elvis just how unique and special he was, but will be a terrific way for a new audience to discover the music and life of The King of Rock ‘n’ Roll.”

The deal was overseen at Sony/ATV by co-president, US, Danny Strick and SVP, business & legal affairs Bruce Scavuzzo.

Producer Scott Prisand said: “We are incredibly excited to have Marty and the Sony/ATV team on board. There is no bigger story in the history of rock ‘n’ roll than Elvis and their support will play an essential role in making Heartbreak Hotel a success.”

Authentic Brands Group president, celebrity and entertainment, Corey Salter, said: “Heartbreak Hotel had a record-breaking world premiere at the Ogunquit Playhouse and we’re thrilled to finally launch in Chicago. Having Floyd Mutrux, Scott Prisand and Sony/ATV as our partners gives this one-of-a-kind musical the support to become a fan favourite in theatres around the world.”