"Everybody wants what they're due": Scribz Riley and Rachel Furner discuss songwriter visibility in 2018 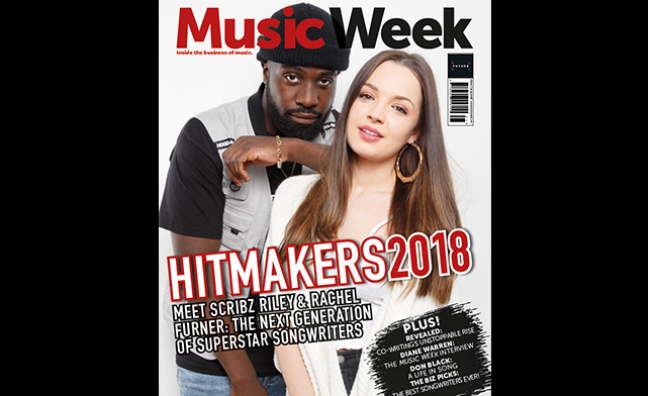 As the Ivor Novello Awards roll into view, in the new issue of Music Week we take our annual in-depth look at the world of songwriting with our Hitmakers special. Heading up our coverage this year are Mike ‘Scribz’ Riley and Rachel Furner.

Together the pair stand among the cream of the crop of the next generation of hitmakers, with Sony/ATV’s Riley having worked with Kendrick Lamar, Cardi B and Khalid while Universal Music Publishing Group’s Furner has written for the likes of Little Mix and Craig David.

In a wide-ranging conversation, Riley and Furner address how they got their breaks into songwriting, the tips they would share, the biggest obstacles to overcome, and address what songwriters need most from the biz in 2018. One of the big talking points, however, was the hot topic of songwriter visibility.

In February, Spotify announced the launch of its new songwriter credits feature. The news was followed in May by YouTube confirming the platform's expansion of artist, songwriter, label and publisher credits via its “Music in this video” initiative.

Writers need to have respect, and the fairness needs to be way more visible

Rachel Furner told Music Week that the moves mark an important step forward in the world of songwriting.

Riley also cited the emergence of Spotify’s Secret Genius programme as another recent important development that has addressed songwriters' lingering issues with representation.

“Everybody just wants credits and what they’re due for their work,” said Riley. “When you’re not credited, it’s like you’re in a sweatshop. It’s amazing that YouTube are doing it, because consumers are lazy. I used to check credits on albums, but a lot of people don’t… If YouTube are doing it, and Spotify are doing it and showing credits, it just gives daily consumers easy access to find out this information.”

Another talking point was the spiralling volume of songwriters it takes to produce today's biggets chart hits – numbers which have attracted criticism from some veteran names in the songwriting world. Riley and Furner both weighed in on the topic.

“I don’t think it is ridiculous as long as the final product is great,” said Riley. “It depends how you work. Some people work better by themselves, some people work better collaborating with people. The truth is in the final product. From the basis of listening to music, if you’re able to bring good music out of having a group of you, then that’s great. I don’t mind either/or.”

Furner went on to address the manner in which some hits can end up with a large amount of writers, but in a largely organic way.

“[Sometimes] you’re in a session where someone will play an idea or something comes through that already has four people on it and you try and jump on it because it sounds amazing,” said Furner. “Then someone does additional production and someone will feature and it ends up being 10 people! But it’s quite a natural process. If the end product is amazing, that’s great. And actually, how amazing is it that, say, 14 people can actually make something cohesive!?”