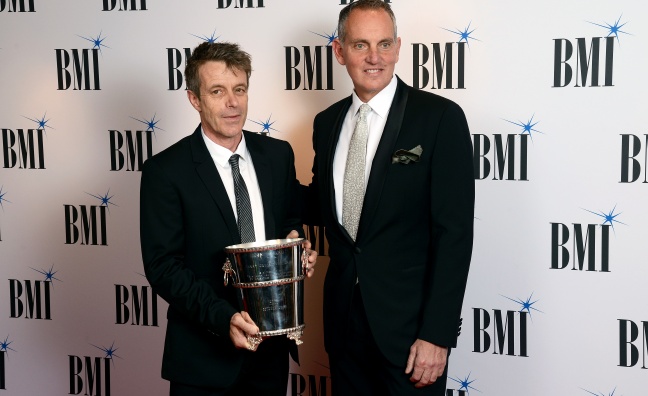 “I’ve been a very lucky person,” said Gregson-Williams as he collected his award. “I do feel incredibly fortunate to even be here tonight. I do recognise how truly lucky I’ve been to have the opportunity to have scored so many amazingly different films over the last 20 years.”

Gregson-Williams thanked those who had helped him during his career, including legendary film composer Hans Zimmer, who took Gregson-Williams to Los Angeles to work with him, and composer Richard Harvey, who gave him his first apprenticeship. Gregson-Williams went to work on films such as Shrek, The Chronicles Of Narnia: The Lion, The Witch And The Wardrobe and Enemy Of The State.

“Many of the highlights for me have been happy collaborations with others far more talented and extraordinary than me,” added Gregson-Williams. “I would not be standing here had it not been for the significant part that BMI played, and still plays in my life. Their guidance and support have been unwavering.”

Guests including Liam Payne, James Arthur, Natasha Bedingfield, Tinie Tempah and Trevor Rabin, attended the awards at London’s Dorchester Hotel to celebrate UK and European songwriters, producers and publishers of the most-performed songs of 2017 in the US.

BMI also honoured Ed Sheeran and Johnny McDaid, with the Song Of The Year award for Shape Of You, Sheeran's third consecutive win, having previously won for Love Yourself, as performed by Justin Bieber in 2017 and for Thinking Out Loud in 2016. Also honoured were publishers Ed Sheeran Music Ltd, Sony/ATV Music Publishing Ltd and Spirit B-Unique Polar Patrol. The award is given to the most performed song of the previous year by UK or European writers in the BMI catalogue. Sheeran's songs also won multiple other gongs, although the singer-songwriter – Music Week's Artist Of The Year in 2017 – did not attend.

The Dance Song Of The Year was awarded to Anders Froen, Noonie Bao, Linus “LotusIV” Wicklund, Sarah Aarons and Alessia Cara for Stay, as performed by Alessia Cara.

Tinie Tempah’s publishing company Imhotep Music Ltd, picked up their first ever award as they were honoured with a BMI London Award for Passionfruit, as performed by Drake.

Other honourees included Caroline Ailin and Ian Kirkpatrick for New Rules as performed by Dua Lipa, Sam Smith for Too Good At Goodbyes, Jamie Hartman for Human as performed by Rag’N’Bone Man, and Jack Patterson, Ina Wroldsen and Ammar Malik for the UK No.1 hit single Rockabye, as performed by Clean Bandit & Anne Marie featuring Sean Paul.