'It's like Four Weddings & A Funeral': Crispin Hunt on the magic of the Ivors 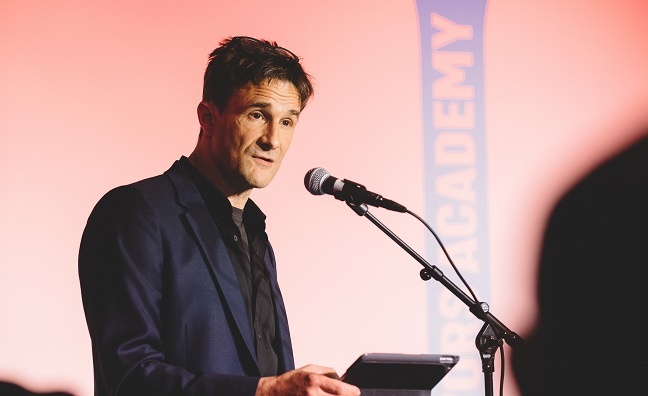 Crispin Hunt has told Music Week that the Ivor Novello Awards show trumps all other music biz ceremonies because of its unpredictability.

Hunt, who features in Music Week’s songwriting special issue, out now, is the chair of the recently rebranded Ivors Academy.

“This year’s nominations are a really interesting list,” he said. “I love the Ivors, you can never tell what it’s going to be. It’s not obvious and it never is.

Hunt stressed that the diversity of the 2019 judging panels played a big part in the finalists for today’s ceremony, which range from The 1975 to Ghetts.

“It’s chosen by other musicians and the judging panels, my God they were cool,” he said. “All the people were incredibly cool and diverse and important.”

Hunt, a songwriter and former member of Longpigs, said that the Ivors benefits from being “judged solely on the music”.

“That’s what makes the Ivors special, when you’ve got a room full of people who may be massive pop stars, they may like this strange song by somebody nobody’s ever heard of and they may choose that to be the best piece of music,” he said. “That’s what’s good about it.”

The Ivors serve a different purpose to the other awards shows

“I’m incredibly proud to have anything to do with the Ivors,” he added. “They serve a different purpose to the other awards shows, which are brilliant, but they’re not really about music, they’re about promotion.”

Now in its 64th year, the Ivors is not broadcast on television, a factor Hunt said serves to further enhance its appeal. However, the Ivors chair did admit that it may be televised in the future.

“We’ve deliberately chosen not to televise it, which I think is important,” he said. “We have no plans to do so at the moment, but it may get televised in the future, but it would have to be done very carefully. The fact it isn’t means people can tell the truth when they’re on stage and people can relax when they’re in there.

“It’s the only awards show that feels like Four Weddings And a Funeral in that you go in at 11 in the morning and everybody starts drinking champagne and by 4 in the afternoon the whole street outside is full of people having a good time,” he added.

This year’s show takes place at London’s Grosvenor Hotel, check musicweek.com and our Twitter page for updates from the event.

“This year’s nominations are fantastic,” Hunt said. “Arctic Monkeys, Ben Howard, Natasha Khan… the film soundtracks and TV soundtracks are great. It’s also really important we’re giving video game scores a profile, that’s a massive place at the moment. A huge amount of new artists and songwriters are getting awarded and it’s really positive that the Ivors Academy is highlighting these people and giving them the exposure they deserve.”

Hunt reflected on his time as chair as “a real challenge”.

“I got asked to be chair and it was an honour, I was given a modernising mandate and it’s been challenging,” he said. “For the right reasons, there was a lot of love for everything BASCA stood for and it was important that we didn’t lose any of that. What we’ve done is develop that. I just think it’s a much cooler look.”