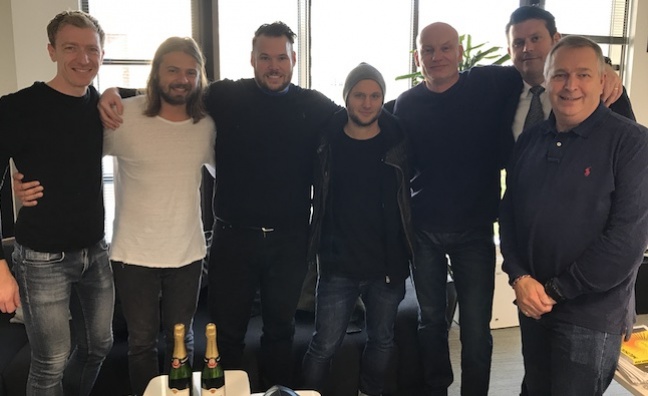 As exclusively revealed in the latest issue of Music Week, Sony/ATV Music Publishing has extended its worldwide deal with songwriter and producer Jamie Scott.

As well as enjoying huge success as co-writer and exec producer on Rag’N’Bone Man’s Human, which is the biggest debut album of the year, Scott has been instrumental in launching the solo career of Niall Horan. The One Direction singer’s debut album Flicker made No.1 in the US, while the lead single This Town entered the UK Top 10.

Scott is also an artist and features on So Far Away, the current collaboration between Martin Garrix and David Guetta, as well as having a writing credit. My Hurricane, Scott’s solo album, was released in 2014.

Sony/ATV UK managing director and president, worldwide creative, Guy Moot, said: “Jamie Scott is a true melodic genius and a songwriter who develops hits constantly with a real understanding of the artist. He has a unique perspective of what it means to be a new artist, with a compassion for and an understanding of where they come from.”

Sony/ATV UK head of A&R, David Ventura, added: “Jamie is undeniably one of the most talented songwriters I have ever met. His songs travel across the world and this reflects his extraordinary talent. It is an honour and a privilege to work with Jamie and his manager Rick Wilson. All of us at Sony/ATV look forward to continuing to be a part of his successes.”

The new deal with Sony/ATV also covers future works, such as his co-write on Rudimental’s next single.

Jamie Scott’s manager Rick Wilson said they had “enjoyed many successful years with Sony/ATV” and we’re looking forward to continuing the relationship.

Scott added: “I’m so grateful that Guy and the great team at Sony/ATV have given me so much support over the last few years. I'm excited for the years ahead and for all that we can achieve together.”

Subscribers can read the full Music Week story including an exclusive interview with Scott here and find out how Scott teamed up with Rag'N'Bone Man here.