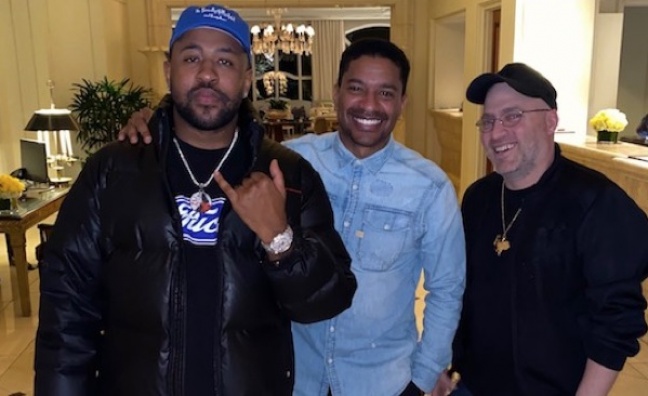 The producer, songwriter and exec returns to the company with an exclusive worldwide publishing agreement.

“Mike is one of the most talented and accomplished producer-songwriters of our time, with some of the biggest hip-hop and pop anthems of the past decade under his name," said Warner Chappell Music president of A&R, US, Ryan Press (pictured with Will and his manager DJ).

"From the creation of our joint venture with Ear Drummer Entertainment to the development of new talent, Mike’s been a long-time business partner and close friend. I can’t wait to see what we’ll do together in his next chapter at Warner Chappell.”

Will, who's credits include Kanye West's Mercy, Beyoncé’s Formation, Kendrick Lamar’s Humble Future’s Turn On The Lights and Rihanna’s Pour It Up, along with his own studio album Ransom 2, said he looked forward to the publishing working with his own label Ear Drummer.

“I’m happy to work with Ryan Press and the rest of the Warner Chappell team. I believe that we’ve built one of the biggest joint ventures of our time, and we’re just getting started," he explained.

"I created Ear Drummer by taking risks and treating everyone like family, and I recognize the importance of collaborating with like-minded people. Press and I have been in sync since 2012. He’s prioritised building a team of music lovers first and foremost, which is so important to me. Warner Chappell understands what it takes to support and realise the dreams and ideas of songwriters and artists, and for these reasons, I’m so proud to combine our powerhouse teams.”