Overnight news from around the world: Tuesday, October 11 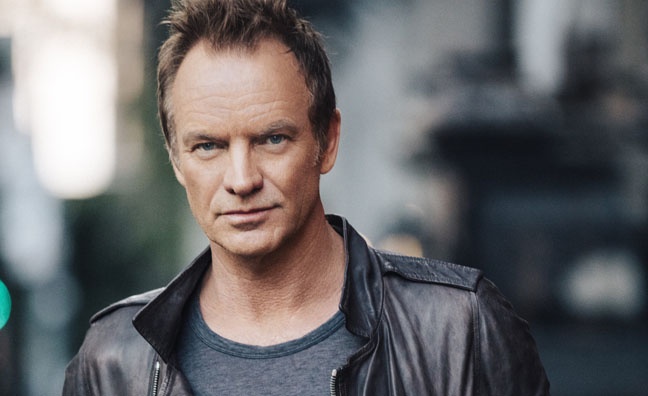 Sting picked up the Icon Award at the BMI Awards in London last night. The former Police singer performed solo acoustic versions of three songs – two Police classics, Message In A Bottle and Every Breath You Take, plus new song Heading South On The Great North Road, which will appear on new album, 57th & 9th, due for release November 11. BMI CEO Mike O’Neill hailed Sting as “truly a creative force, a brilliant songwriter, an artist” as he handed over the award. Sting responded by calling it “a fabulous honour”. “It’s a little premature,” he quipped, “But I’m extremely grateful." (Music Week)

The Association of Independent Festivals (AIF) has announced the shortlist for The Festival Congress Awards 2016. Taking place on Tuesday, November 1 at DEPOT in Cardiff, the ceremony will be hosted by Glastonbury Festival’s Ben Challis. There are 10 award categories including the newly introduced Act of Independence award, highlighting a moment in the festival season that embodied the spirit of independence. Nominees include Shambala for introducing a 100% meat and fish free policy and MAST onsite drugs testing, which was piloted at several AIF member festivals this summer. It has also been confirmed that the 2016 Unsung Hero award will be presented to health, safety and welfare expert Penny Mellor, who has worked in the events sector for more than 40 years.

Kesha's lawyers have asked a Manhattan judge to block Dr Luke from releasing her personal medical records, which she was forced to turn over in their ongoing legal battle. The singer is said to be worried the producer and songwriter could leak the more than 900 pages of her medical records. (Page Six)

Drake has announced a UK and Ireland tour for early 2017, including six nights at The O2. Beginning in Glasgow on January 6, The Boy Meets World Tour will visit arenas in London, Leeds, Manchester, Sheffield, Dublin before finishing in Birmingham on February 23. Tickets go on sale October 14.

Merlin, the global digital rights agency for the independent label sector, has opened a Japanese office. Based in the Ebisu district of central Toyko, the new office, opened two years after the company launched its New York office, is being managed by Haji Taniguchi, formerly president of Avex Music Publishing Inc and one of the most experienced executives in the Asian music business.

A man has pleaded guilty to illegally distributing chart hits online. Wayne Evans, 39, was arrested at his home in Everton, Liverpool, on September 3 last year following a joint investigation between PRS for Music and the City of London’s Police Intellectual Property Crime Unit (PIPCU). On Friday, Evans pleaded guilty at Liverpool Crown Court to illegally uploading the UK’s Top 40 singles to various torrent sites as they were announced each week by the Official Charts Company. He was also distributing tracks through his own website, including ‘acappella’ music to be used for DJ-ing and remixing. Sentencing will take place on November 11.

Music Venue Trust has announced the final details for Venues Day 2016 which takes place on Tuesday, October 18 at The Roundhouse. The event will feature more thgan 500 delegates this year, with over 180 venues represented, 12 exhibitors, and 60 speakers spread across ten panels discussing issues such as planning, licensing, funding, music industry relationships, and audience development. To complete the picture, Music Venue Trust will also be using Venues Day 2016 to make five significant announcements on the day which will see the charity move to act in every area to support its mission to protect, secure and improve grassroots music venues across the UK.

Artist management firm ie:music, which counts Robbie Williams, Passenger and Lily Allen among its clients, has announced a number of key internal promotions following the recent death of co-founder David Enthoven. Enthoven, who launched the company with Tim Clark in 1992, died in August. The reshuffle sees two longtime staff members, Dan Medland and Michael Loney, promoted to joint MD, and Stephen O’Reilly join as the company’s new head of marketing.

Production specialist Dick Tee will receive the Outstanding Contribution To Festivals Award at this year's UK Festival Awards at Roundhouse on November 28. Tee was head of production at Glastonbury Festival for 18 years, has worked on 200 festivals in this 35-year career.